Cringefest went well. I took 987 photos and got a blistery scalp by the time it was done. Overall the show went well ... but the turnout wasn't as high as expected considering the fact that 17 bands were there (the 18th band, Skywind, had mechanical failure and missed the show--they broke down on their journey from Minnesota).

There was somewhere around 1,200 people at Cringefest. Next year there will be twice or three times that. That's an offical Olson prediction.

Have a great week!
Shawn

2011-10-31 That prediction was not very good. Cringe broke up shortly after Cringefest... 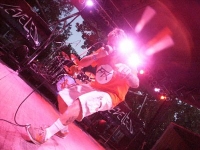 Billy from Leveled. This was one of the coolest photos I took at Cringefest.