Well the pool opened here last week, and the kids were insistent that I take them. Well I know, like you probably do too, that the water in a pool isn't so warm this early in the season. Well, you know, kids don't seem to realize that.

They pestered me and harassed me and cried and fussed and moaned until finally, I said, "All right, I will take you. But this isn't to reward you for your whining... it's to teach you a lesson. You'll have to stay in the water until I say you can get out."

Beaming with naive excitement, they dawned their swimming clothes and lead me to the pool.

We got there and one of my boys dipped his foot in the water and immediately withdrew it in shock.

"No, no," I said, "Come over here. On the count of three I want you all to jump in. And remember, you have to stay in until I say you can get out."

One... two... three. Splash. I can only cringe at the feeling they must've felt in the springtime water. Wide-eyed and trying to act perfectly warm, they stiffly began to wade through the water.

I settled down with a fat volume on MySQL administration and began to read. I would see one child shivering, but as soon as she saw me looking she hid her chattering teeth. "Cold, now, isn't it," I asked. "No, not at all," she said through clenched teeth.

Well they slowly adapted to the water, but they weren't cheering and screaming with joy like children usually do. I wanted to finish my chapter, but decided to pull them out before hypothermia and pneumonia set it. And wouldn't you know, they didn't throw a fit when I told them to get out... How strange.

The kids were a little more anxious to get home than in any previous trip to the pool. When I put the boys in for a nice warm bath... I asked them what they had learned.

"We will listen to you next time, Dad."

Sometimes people just have to learn their lessons the hard way.

I've been wanting to photography a woodcock (a marshland bird with perfect camouflage, also known as a snipe--yes snipes are real birds) for years. They live in the woods near my home. They hide so well in the undergrowth that you never see them unless they are flying away--when you get a flash of their white backside.

Well last week Dad and the boys and I took a trip back in the woods. A storm looked imminent, so I left my camera at home. What a mistake!

An adult woodcock exploded from the foilage and disappeared into the woods. A moment later another did the same. With that clue, I immediately scanned the ground to find a youngster sitting motionless in hiding. It was the best look I've ever gotten of one of these mysterious birds... and I approached within a couple feet. Its large eyes and extrememly long, thick beak seemed prehistoric.

I came back the next day with my camera but the birds were nowhere to be found. They'd moved camp. Foraging around a blooming blackberry patch, I finally did stir an adult into the air, but I had no time to photograph him.

Well the site was down for eight hours on May 29 due to server problems. Actually all sites under my wing were down for that period. Thankfully the server finally got back up and running.

Have a good week,
Shawn 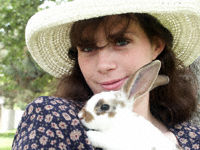 A portrait of Jenny and our recent addition to the family, Peanut.