Jamie stopped. Ahead a group of teenagers stepped onto the train tracks. It was chilly, but the rocks and metal were collecting enough sunlight to cause the boys to shimmer and undulate like specters in the distance.

Half-turning, she paused and looked back the way she had come. No… she couldn’t go back now. Not now, at least. Biting her lip, she spun for a moment, deciding where to go. She could always go through the old homes north of her… go to a café and think. Clamping her jaw, she was just about to step off in that direction when she turned completely and descended quickly into the woods south of the tracks.

Ahead… the boys too disappeared from the tracks.

Jamie used to come back here all the time. She and her friends had used the woods as a stomping ground while growing up. Hide and Seek, camping out, making out… Jamie smiled for the first time in days.

It’s been so long, she thought. She found one of the old paths they had used so often. It was still there, though weeds covered most of it. Why did we stop coming back here?

She walked deeper, overcome with a succession of old memories. The trees were still familiar to her, and she imagined watching a younger version of herself dodging through them in a game with old friends. Echoes and laughter circled through her mind.

She had walked deep into the woods but deeper into her past when an ancient part of her mind ripped her out of reverie. Standing completely still, she felt the hair on her arms tingling. A swelling sensation to bolt boiled in her neck and legs. Euphoria and fear began to mingle into panic.

The chirping birds had become silent. Only a mild wind moaned softly through the woods… rustling sparse brown leaves hanging loosely from trees.

Without turning her head, she scanned the foliage ahead. She saw no one. Did those boys follow me? Her chest began to heave as she realized that the feeling she had was that someone was near. Terrified of what she was about to see, she balled her fist and whipped her body around.

Her eyes had already closed and she had balled her arms up to protect her face. But she stood there for several moments and nothing happened. Slowly, she opened her eyes and lowered her fists.

There was no one there. Above her a squirrel flipped its tail innocently. Jamie almost laughed. And she almost cried.

To her left there was someone. Dark and hunched over, the man's face was a shadowy profile hidden under a wild mane of mangy hair. He held something in his hands, but made no effort to move or acknowledge Jamie’s presence.

Again fear began to urge her to run. But this time it only impelled her to hold her breath shortly. This man was sitting at an old campfire she and her friends had used as kids. The stones were scattered. One of his feet extended into the pit. She noticed his toe stuck out from the end.

Realization dawned on her that this man was homeless. He could use some new clothes and a blanket.

His hair moved as if his opposite arm was scratching his head. Jamie stepped forward and tapped him on the shoulder. A bird exploded from his hair and he fell back… his body staying frozen in the hunched position and turning her way.

Jamie tumbled back, gasping. Her mind spun chaotically, and she felt like she was falling even after she hit the ground. Panic shoved her back against a nearby tree. Eyes wide and breath speeding, she wanted to scream but she couldn’t. All she could do was stare at the gray eyes that were staring straight back at her, eyes that were surrealistically familiar and gruesomely lifeless.

She could not get up, her body was unwilling to move. The trees and the light and the dead man spun around her, circling like a whirlpool of unreal tragedy. Her eyes closed and she went limp.

Richard smiled and picked up a stick when Ben grabbed his arm. Richard looked up to follow Ben’s pointed finger to a young blond woman lying at the base of a tree.

The boys quickly circled in. "He’s dead…” said one boy before they even got to him.

They checked the girl. She was still breathing but wouldn’t wake up.

Ben told a couple of the boys to carry her out of the woods and call an ambulance. They rushed her off.

"I sure hope not,” said Richard. He then kicked the corpse. It caused something to fall out of the dead man’s hands.

Ben picked it up. It was an old portrait of a blond girl in pig tails. Ben turned it over…it read "Jamie, 3 years old.”

Ben kicked him too. "Old pervert.” 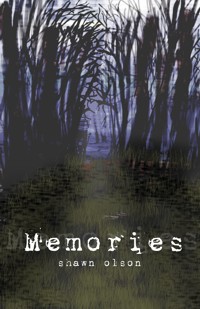 A walk down memory lane leads Jane into the woods... what she finds is terrifying.