A Day at the Dentist

"You’re going to feel a small sting,” said the young woman. She had brown hair that came to her shoulders, with smooth skin on her pleasantly angled face. If I were a younger man I probably would have made some wisecrack remark about taking her out to dinner. No—it wasn’t that I wasn’t so young anymore that I didn’t throw my efforts on this girl, since it’s true that only the night before I had been all too willing to throw myself at the college girls at Barney’s Pub.

Something was different about today. The nitrous oxide probably had something to do with it. I lay there calmly, waiting for that stinging sensation that would further numb me. She pulled back my gums, and I could feel the cold rubber of her fingers strongly against my warm cheek.

Yes, there was a sting. Normally needles appalled me, but I endured the sting with dignity. With some sense of detached amusement, I sensed the cold novocaine surging into the flesh of my palate.

She removed the needle and injected the anesthetic into other regions around the criminal tooth. Why was I feeling so calm? I noticed the light above me, shining like the searchlight of a helicopter looking for a fugitive in the night. It was a beacon that got brighter and brighter as the moments passed, and as I stared into it I noticed the colors turn from white to yellow to red.

This isn’t normal, I thought. Something definitely was wrong. The gases and drugs in a dentist’s clinic did not cause hallucinations. I knew that something was wrong, but something in me was so uncaring that I could not bother to consider the anomaly any more.

My mouth was numb now. The young woman was prying and tugging with a tool of some sort. I saw another student come in behind and watch her. This student was a guy, probably in his later years of study. He did not look so amazed at the procedure, but when the girl gave up in a moment of frustration, he eagerly took her spot.

His hands were bigger, and his touch much less delicate. Pushing and tugging and pulling, I could feel the teeth on the other side of my face pulling. It almost seemed that my entire mouth was being pulled apart, but I could not hold onto the horror of the sensation. Instead, I felt an unnatural fascination.

"Go get the stabilizer,” he said. The girl disappeared. He removed from my mouth his hands and tool for a moment. I relaxed my mouth, swallowing the chilled saliva that was collecting uncomfortably in the back of my mouth.

"Having problems?” I slurred.

He no more than looked at me for a moment with a nearly annoyed glance before he turned away and looked at the x-rays of my mouth. He held it up against another paper, and for the brief second that it was in my foggy sight, it seemed that he was overlaying the x-rays on a schematic diagram for some sort of device. But then he walked out of the cubicle.

My head was throbbing in a very drunken manner. I wondered whether something had gone wrong, whether the doctors suddenly realized that this routine procedure was not going to solve my ailment. Perhaps they uncovered a serious condition.

I sat up, intent on asking a question, but nobody was in my cubicle, and vertigo immediately thrust me back into my seat.

I let myself sink into a half-conscious stupor. Mostly I embraced the throbbing and pumping of the blood through my veins. It almost seemed that I could here the life-giving liquid coursing through my ears, the pounding of my heart booming in my head. I almost felt like I was floating on the oceans of an alien world. Oddly, I was happy, not in the least disturbed or frightened.

The first thing I felt as I was brought back to awareness was that tugging. I opened my eye and saw the blurry white image of an arm over my face. The arm moved violently across my face, and although I felt no pain, my whole head was pulled to the right. A strong pressure throughout my skull felt very abnormal.

I’m not exactly sure what was happening, but I heard some bone snap, followed by the grisly tearing of flesh. The arm pulled more, and a very uncomfortably coldness touched my sinuses. The arm moved again, covering my entire view. I felt another strong tug accompanied by pressure in my eyes. In that instant my view faded but immediately turned to a swirling mass of colors mutating into a dizzying array of shapes.

All sound of the operation was immediately replaced by a high pitched cacophony of noise that rose and fell with the swelling of the images swimming in my eyes.

I should have been terribly concerned, but I was manifestly unable to feel any fear for my safety. It was as if I was no longer capable of feeling concern for my wellbeing. I watched in amazement as the shapes and colors ebbed in and out of existence, the kaleidoscopic patterns morphing into blasting shoots of multicolored fireworks that coalesced into smiling masks.

When the images began to fade in intensity and the noise became more of a monotonous tone of flicking and hissing noise, I began to feel the first sense of panic in this entire operation. Is this the end? I thought that perhaps my brain was at the end of its journey to death that probably began a few minutes before. I was sadly conscious of the fact that I was losing all of my perceptions, and I would probably cease to be in a few moments.

But then I was blinded by a sudden blast of noisy white light that blared down onto my consciousness like a bolt of purely chaotic energy. Is this my Judgment? I watched the noisy light for a length of time, at first fascinated, but then worried. Was this going to be the way I would spend eternity, forever viewing this stream of random fuzzy light and noise? Or was this the bizarre effect of some odd drug?

Something about me was fundamentally wrong. I wanted so much to scream, but that urge had an alien feel about it, as if I could only partially comprehend the instinct. I wanted to scream, but I was not so sure what screaming was. Then in a moment of soul jerking terror, I realized the horror of my situation. I could not scream because I had no mouth. I could not utter an oath or prayer, not even leave because I had no legs. I was floating in this bizarre maze of noise and lights, a mind without a body. I could do nothing. I could only witness and exist mentally.

A terrible warping of the noisy background startled me. It seemed for a moment that the universe were tearing apart. Perhaps I would witness the big bang. Perhaps my soul was drifting on the fringe of another dimension.

I wanted—no I needed to end this. I wanted to twist in violent rage and vent my terror onto the universe. But I had no release.

Then I noticed something that sent an imaginary tingling down my phantom spine. The background was taking a form. The random fuzzy noise was dispersing itself in such a way, the dark spots melting together away from the light, as to create the image of a fuzzy man. I could see a man’s body, and I could almost see his face. The chaos behind him was more orderly too, and it seemed that I was watching an old television set that was badly out of tune.

A blaring voice boomed into my head, almost blinding me with its amplitude.

Immediately I heard someone say, as if through a long tube at the end of a megaphone, "Turn it down, he’s convulsing.”

Another voice answered, this time not so loudly. "Is it him or the interface?”

The image turned to greet the shadowy mess of another man.

"The interface is up. We are only now set up for input, but the feedback shows that he is receiving this. We need to fine tune the software, but as of now he should be able to make out our voices and see crude shadows.”

"Why didn’t you wait until you were ready for the output interface?”

"This is only a preliminary test. We don’t need the subject’s point of view logged at this stage.”

I saw the men turn to look at something. Then my field of view shifted, and I could see what they were looking at. It looked like a body lying on a table. The image was dark and unclear, and I was looking down over their shoulders. But I was sure that what I saw was a body with a large set of pipes or cables coming from its skull.

"Well we ran into trouble at the start. The skull cracked, and one of the interns made a few insertion errors. He’s been like this for twelve days. I don’t think the face will heal up, and the infection along the exposed palate there looks severe. But he should at least live long enough for us to learn what we need to know.”

I saw the body begin to heave as if it was breathing heavily, panicking. The images turned toward me, and one of them reached up at me until his hand covered my entire view. Then it snapped to blackness. Soon the images of lights began to swirl before me again. I never, ever could fall asleep here.

Nice use of words. 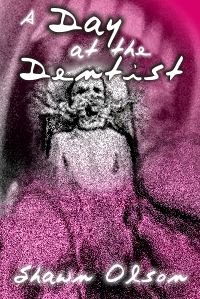 "A Day at the Dentist" by Shawn Olson. This is a strange tale of a visit to the dentist gone wrong. Included in this graphic is a sketch by Brett Atherton.