Roger was a deep sleeper. Perhaps this stemmed from his habit of staying up much later than he ought to. Usually he stayed up half the night courting his Playstation while his wife slumbered upstairs.

Tonight was like all others. Roger played video games until 2:23 AM. Then he checked his email before turning off his computer--everything was spam. Before switching off the last light, he checked all the kids… they were all breathing deeply.

He curled in bed next to his wife. She moaned in half-comatose recognition of his presence, then pulled the blanket tighter around herself. Reaching his arm around her, he spooned her for a while… until the blood in his left arm was cut off under his weight and he rolled the other way.

Each breath became slower and deeper and more relaxing. He let his mind drift from tomorrow's chores to the upcoming vacation. That thought caught his wandering imagination, and soon he was dreaming of his hikes through the forested mountains of western Canada. The kids would love the camping. Roger and his wife would enjoy the fresh romance of the wilderness.

A helicopter swooped close to his home, half waking Roger from his slumber. Barely opening his eye, he saw the time had already passed to 3:47 AM. Turning back over, he tried to drown out the sounds of the circling helicopter and the bright search light that occasionally engulfed his bedroom.

He had already drifted back to sleep by the time the helicopter left. His dreams became much weirder after he returned to sleep. The vacationing family encountered epic thunderstorms and marauding packs of ravenous wolves. But somehow they survived all their travails. But all along Roger had this unsettling feeling that something in the deep Canadian forest was watching him, following him.

"Stay close to me," said Roger, "I'll protect you." The kids were scared. His wife kept herself calm for the sake of the kids, but Roger could see that the whites of her eyes were much larger than normal.

Lightning flashed overhead. And in that brief moment of light Roger saw two red, almost human eyes, staring at him from the shadows of the rocky ledge below. Thunder boomed across the valley--.

The helicopter was back, and Roger stared at the wall. He felt his wife get up from bed and heard her walk down the creaking stairs. Taking a deep sigh of relief, he tried again to ignore the circling helicopter. But this time he couldn't. Men started shouting in the street and cars screeched. A gunshot went off and immediately Roger sat up in bed.

A loud bang sounded at the front door. "Police," shouted a voice, "open up."

It was then that Roger noticed that his wife was still in bed. She didn't move when he touched her. 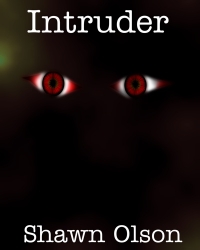 Another piece of horror in the "Cracked Thoughts" series.