A sudden gust of cold air came from the west. The torches atop bundled cornstalks tore into furious dances, whipping loudly against the wind.

Jane huddled close to Frank. Her hair raised wildly up into his face. Pulling her into his jacket, he looked up at the long line of people in front of them and sighed.

"Maybe this was a bad idea," said Frank. He shook his head. "But I really wanted to take you on a hay ride."

Jane looked up at him with a warm smile. She hugged him tighter and said, "The line isn’t too long."

The wind came and went, but steadily increased in ferocity when lumbering clouds rolled in. No rain had been forecast, but a cold front caused some to wish they had brought thicker coats. Before long, the chill wind sent some families out of line and back to their cars for fear of sick children. This helped Jane and Frank get to the ticket booth sooner than they had expected.

The hayride wasn't exactly as romantic as Frank had hoped. Almost forty people crowded onto two carts pulled by a slow red tractor. One family-of-six nearly surrounded Frank and Jane. The kids kept bouncing around anxiously, impatiently. One fell into them, and Frank grimaced in annoyance. The father ignored the incident and the mother returned it with indignant indifference.

Frank tried to ignore the distractions, and he whispered into Jane’s ear. "Look at the sunset."

Bright pink waves coated the belly of the dark clouds in the west. An orb of light hung like a beacon under a canopy, its rays spreading across the horizon as if crafted by a master artist. Frank held Jane in his arms and they both watched the orb slowly sink behind lines of trees… the brief ocean of color in the sky darkened and faded into a mass of mutating gray and black.

The tractor pulled them through a bumpy field lined with the cornstalk torches. It went into a path through a cornfield, where the torches stopped—here the cart became dark. Holding onto Jane, Frank rubbed his face against her neck. Feeling her warm skin against his cheek and smelling her sweet perfume, he felt a sudden urge to kiss her. Nibbling ever so slightly on her neck, he was suddenly pulled from the moment when the mother next to them boomed out.

"Good God," said the woman sarcastically. "Can't you find someplace else to do that? There are children on this ride."

Both Jane and Frank took a deep breath and turned away from the mother. The woman never stopped complaining until they were out of the cornfield and back in another torch-lit field.

The guide sitting with the driver turned toward the carts and half-rose from his seat. He started talking about the history of corn and pumpkins and the Jack O'Lantern. Everyone jerked forward as the tractor unexpectedly stopped and the driver set the brakes.

Both the driver and the guide left the tractor and motioned for everyone to get down. They were parked in the middle of a large pumpkin patch. The guide continued, speaking louder now to overcome the commotion of the dismount and the wind. "Both pumpkins and corn have been traced back to Mexico and Central America. Both have a long history and set of myths that…" The guide continued but Frank could not hear the rest of his comments because Jane had pushed him up against the tractor behind the group.

After a long kiss, Jane pulled back and looked at Frank with a smirk on her face and a twinkle in her eye. She said, "I can think of something better to do right now."

The group had encircled the tour guide, who was lifting a large Jack O'Lantern onto a makeshift table made of old wooden crates. The tour guide's face was lit from the small campfire below him. Putting his hand on the Jack O'Lantern, he said, "There are many legends about 'Stingy Jack' as the people in the old country used to call him. But one thing is certain… when he came over to our country many centuries ago, his spirit married the ghost of an Indian Princess cursed to spend her unending days haunting the dying fields of Autumn."

The children and even some of the adults stared in wide-eyed rapture. But the tour guide did not notice their faces. His eyes were stuck on the quickly fading set of shadows running hand-in-hand into the darkness.

"But the marriage is forever unfulfilled, for the Princess can never take form except in the body of living woman on a single night throughout the year. Only on that night—this night—can the two meet."

He paused and scanned the group, his face chiseled in well-practiced seriousness. "Tonight she will steal someone's body."

Already the kids were hugging their parents tightly. When a shriek of high-pitched and desperate horror called out from the darkness beyond, all in the audience jumped.

Kids cried and parents laughed as the tour guide motioned for them to climb back onto the carts of hay. Murmurs of good storytelling and good timing erupted from the group. The driver released the break, and with a jolt the hayride was on its way again, back towards the exit.

The tour guide stayed with the campfire until the tractor had disappeared into the cornfield. Then he picked up the Jack O'Lantern, ablaze with fire inside, and walked out into the darkness of the night. 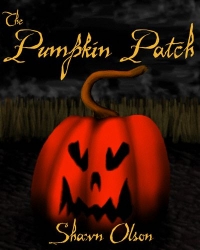 A horror walks the shadows of the pumpkin patch during cold Autumn nights.