Captain Jarolds sat alone in his office. Only a haze of maroon light lit Jarolds' face as he poured through the information collected from the expedition. Very little information was recovered from Rogue 5; most of the computers had been destroyed from electrical fires and corrosive acids… some of which could not be identified.

Heavily armed crews were now scouring the forests around Rogue 5, but Jarolds knew that they would find nothing relevant to the destruction of one of the most secret ships in the galaxy. Already, a heavy stir was crisscrossing the ship as each crewmember that caught wind of the find was immediately forced to ask How?

Jarolds stopped the video and zoomed in on the noise-cluttered image before him. It was video from one of the few databases that survived (partially). In it Jarolds could see a fisheye view of the Rogue 5 bridge. He let the video resume at one-tenth the normal rate; he saw, as if in a broken dance, the commanding officers skip across a semi-coherent sequence of half-present but continuously broken frames.

Everything seemed normal. Officers conversed. Monitors glowed. No alarms flashed. Then walked in Captain Hunter. Immediately Jarolds tried to zoom in on Hunter's face, but the visual static and pixelation made the image almost unrecognizable… so he zoomed back out.

Hunter said something to the crew, and everyone immediately cheered. The audio was completely destroyed, and nothing specific could be heard. Within moments Hunter turned to leave the bridge when the image suddenly broke up. Thirty seconds were lost; all that was visible when static subsided was a dark bridge and the shadow of a man writhing in apparent agony in the backlit doorway to the administration hub. Darkness soon consumed the image, leaving only shadowy collections of random pixels and noise.

Jarolds sat back in his chair and looked out to the planet below. His stare seemed to cut right through the purple planet; even this ruggedly nonplussed veteran of the fleet found himself befuddled by these images and the wreck thousands of miles below. Searching for answers, Jarolds did not notice the blinking yellow light at his door.

Carrington entered and stood at the Captain's desk. She stood as her profession had taught her to: straight and clean. But Jarolds could feel her bursting tension, and he could see that in her eyes she was leaning forward, shouting incredulously like a confused civilian gossiping about some distant war that just might come to her neighborhood.

"You have news?" asked Jarolds.

Carrington spoke more calmly than she did over routine and uneventful scouting reports. "Burson's crews have scanned the region within a twenty mile radius of the wreck. They haven't found anything of consequence."

Pausing to look briefly at the planet, Carrington continued, "Analysis of the corrosive acid from the wreck is still inconclusive. We should know within an hour the exact composition of the acid… but it's almost impossible to ascertain where it came from. It's not likely to have come from the ship.

"But we have learned something of importance."

She paused to see if the Captain would respond. She did not even get a twitch of Jarold's eyebrows.

Inhaling deeply, she said, "Analysis of the existing video clips has produced some transcripts of the conversations among some of the crew members." She prompted Jarolds to his monitor, and he switched the display to the latest analysis. He scrolled ahead to find the bridge conversation.

Carrington said, "The crew did not know they were in danger." She noticed now that Jarolds was pursing his brows and seemed intent on finding something. "But they did know that someone was coming."

Jarolds had not found the passage yet, but he already knew what Carrington was about to say. Carrington said, "The last thing we could ascertain coming from Captain Hunter’s lips was"—Jarolds mouthed the words as she spoke—"They’ve arrived."

Jarolds did not lift his head but raised his eyes to stare at Carrington. Carrington was breathing heavily, but did not speak.

Immediately her shoulders slumped and she shook her head. "Henry, how the hell did Rogue 5 get here? What’s going on?"

Leaning back, Captain Henry Jarolds took a deep breath and said, "I don't know." He rose and leaned against the electronic window to view the purple Jadus. Carrington saw his reflection in the window, and she saw a look rarely seen on his face; the creases in Jarolds' face were more hidden in shadow than ever before.

Intending to speak, Carrington opened her mouth to ask what it was the Jarolds was holding back… but instead she slowly backed away and silently left the captain to himself. Jarolds did not turn, though he heard her leave.

Swearing, Jarold closed his eyes. He conjured an image of a young Captain Hunter just twenty years ago. Through the foggy wisp of time and memory, Jarolds remembered shaking hands with Hunter and wishing him farewell as Hunter was taking his first command on a new expeditionary mission to research a new intelligent race on the other side of the galaxy.

Jarolds opened his eyes. Rogue 5 and Hunter's crew had disappeared almost twenty years before, along with any trace of the new race transmitting from that distant corner of space.

The Mask of Rogue 7 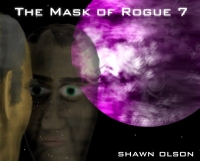 Chapter Five in "The Mask of Rogue 7".