"Captain, I'm not very confidant about this."

Captain Donald Cassim didn't turn his head from the view screen. He kept his brows furrowed as he scanned the image of the derelict ship. The only indication that he heard the complaint of his first officer was the slight tightening of his already pursed lips.

Cassim turned to the scan console and cycled through every type of scan he could use. Nothing indicated that there were any survivors.

Cassim turned to his first officer and said, "Ready a survey team. Include an engineer." He paused and said, "You've got command, Trev."

Commander Trevor Michelson nodded. He watched the captain leave, a deep frown following the square shoulders of his compatriot. As the doors closed, Trevor called together a team that would escort Cassim to Rogue 7.

When Lieutenant Mao-Koi gave Trevor that sharp cold look that was always a trained decoy to hide her instinctive fears, he made a call to Lieutenant Havelich.

Trevor said, "Have an armed team ready for deployment. Get a medic team too."

Trevor turned to Mao-Koi. The coldness on her face did not fade.

Cassim looked over his team. Some of the finest scientists in the fleet were here, including Engineer Robert McCain. Cassim tried to recall what it was that the scientific community had loudly praised him for as a freshman recruit a few years ago, but he couldn’t quite remember. Something to do with hyperdrive conductors.

Cassim turned to the port and looked at the green planet below. Jadus was a valuable world, the scientists had decided. That's what the reports said and the citizens heard. The potential for human habitation had been the vanguard for the exploration of the world. Cassim didn't know much about colonization or habitability. What he did know that had that been the real reason for the interest and investment in this planet, Rogue 7 would not have been the ship leading the expedition.

And Cassim would not have been called in to investigate this tragedy.

The shuttle tugged slightly as the retro-rockets fired, and a loud clanging thud indicated that docking was nearly complete. Cassim released his harness and floated to the docking door. The rest of the team was still buckled in when the green light indicated that pressure stability was confirmed.

With the sound of belts clicking behind him, Cassim opened the door. Rogue 7 power was offline, and the passage ahead was pitch black. Cassim's suit alerted him with an audible warning that the outside temperature was lethally below human safety parameters. The suit warned against removing the protective helmet.

Turning on his light, Cassim half-expected a contorted pile of twisted bodies floating freely in the corridor. There was no such scene. Only the dark and clean passage leading to the entrance hub.

Cassim said, "I want Wolf, Rogers and Billows to escort McCain to the engine room. Willis and Martin, come with me. The rest of you spread out in teams of three and search for survivors.

Report to me the moment you find anything."

Cassim called Trevor. "We're in," said the captain. "We've found none of the crew. I'm going to the bridge."

Trevor said, "Scans aren't showing anything new. We're tracking your movement. I have a team ready to back you up if anything goes wrong."

"That's why I requested you Trev." Smiling, Cassim pointed down the passage that would lead his group to the bridge. As his men started toward the front of the ship, Cassim said to Trevor, "Let us know if you notice any anomalies."

Trevor said, "We will. Be careful."

Navigating the ship was awkward. Although Rogue 7 was identical to Cassim’s Rogue 3, Cassim was not used to the lack of simulated gravity. The ship was not spinning, and climbing up and down the walkways was tedious. What normally took ten seconds to walk now took over half a minute to climb.

At the end of the passage was the main elevator to the bridge. Cassim instinctively reached for the access panel, but when none of the keys lit up, he cursed under his breath.

McCain called back, "We haven't reached the engine deck. The doors are locked. Actually, I think they’re sealed. Hold on…"

At that moment the communication grid became a cacophony of shouts and warnings, as there was a tremendously loud banging noise from deep within the ship. It was the sound of heavy metal banging into metal, followed by a screeching noise reminiscent of a collapsing hull. The entire passage shuttered.

The captain muted all channels except to the command console on Rogue 7. Cassim said, "What the hell's going on?"

Trevor said, "I don't know, Don. Everything looks fine from here. We don’t register any change."

Cassim said, "There was a tremendous movement within the ship. The ship shook, and sounded like it was about to collapse."

Trevor said, "We didn't record any change in velocity. No vibrations other than those of the teams scouring the ship."

Cassim said, "Well there was something. We all felt it at once. Check the sensors for problems. We’re pulling out."

Cassim stopped all outgoing lines from each team member and ordered them to return to the shuttle. When he opened the lines again, he demanded reports from each team leader. They had all experienced the same noises and shutter.

Heading back to the shuttle access, Cassim noticed that condensation was forming on the outside of his suit, indicating that the temperature was rising. He ordered the search teams to hurry their departure.

At the shuttle door, Cassim stopped in bewildered uncertainty. Squinting and leaning forward, he stopped just short of the shuttle entrance.

Ensign Willis said, "What the hell is that?"

The liquid forming on the airlock doors was purple. It formed much too quickly to be condensation, as it dripped more and more rapidly from the walls. The fact that it was dripping in zero gravity sent chills down Cassim's spine.

Cassim brought up the environmental console into the shield screen of his helmet. The temperature was still dangerously cold.

Cassim called out to Trevor, "There is a bizarre condensation forming along the walls of the ship."

Trevor did not respond.

The liquid became slightly gelatinous as droplets collided in mid-air, stretching and almost reaching out, as if alive, to form a web-like membrane across the airlock door.

Cassim and his two escorts dropped back as the membrane coalesced into a solid wall of undulating purple.

The membrane grew as the purple substance spread across the walls. Releasing his hold on the railings, Cassim floated freely as the membrane began to race into existence, consuming the walls.

Willis did not let go in time. The waving mass climbed up his arm and quickly covered his entire body. Contorting as he lashed and kicked, Willis tried to kick himself away from the wall.

But the moment his foot landed on the wall, there was no rebound as his body was further glued to the entity.

Cassim stopped Ensign Martin as Martin motioned towards his stuggling comrade. Cassim said, "Come on We need to get into the shuttle."

Cassim called for the team leaders. None responded.

Cassim pulled his blaster and aimed at the membrane blocking the airlock. He gave a sidelong glance to Martin, who only returned a wide-eyed look of sweaty panic.

Cassim pulled the trigger. As the bolt of red plasma sprayed into the membrane, globules of the purple substance spurted across the entire corridor. Wiping the liquid off his visor, Cassim immediately tried to lean away from the airlock. The hair on his neck rose, and a chilly sensation tickled harshly up his arms and spine.

Long tendrils of the purple membrane held Martin. They were pulling him into the dark hole left from the blaster shot.

Cassim noticed the crack in Martin's visor, the trail of purple substance that was weaving across the inside of the helmet.

The helmet exploded, and Cassim watched in disbelief as the face of his ensign bubbled as if exposed to an intense dose of radiation. The skin churned and twisted, and his head drew back, leaving open his mouth that soon filled with the purple gelatin.

Cassim hit the back wall and immediately his view was covered with purple, then black. Before his view was completely gone, though, he saw a dark glowing face where Martin had been. The visor cracked, and oxygen streamed out as quickly as the purple liquid poured into his face and filled his lungs.

Trevor was shouting. He ordered Havelich to get the captain. Every position on the bridge was abuzz with activity. Alarms were going off. Trevor went to the command console to give more orders.

That’s when the call came.

Cassim's voice broke through the intercom, and immediately the bridge was silent. "Commander Michelson," said Cassim.

"There’s no time to explain," said Cassim. We're coming back now. Have the entire medical staff ready for our arrival."

Trevor ordered his technicians to work on the sensors. He said to Cassim, "I don't understand. Sensors are working fine. They are reporting our activities onboard 3 just fine."

"Well the crew of 7 says that's what it is, and I don’t want to argue it right now."

Trevor watched the small shuttle leaving the dead Rogue 7. He had an uneasy feeling. It almost felt like the shuttle departed the old ship in the manner of a seed leaving the pod of a plant.

The shuttle slowly traversed the small distance of space. Finally, it docked. There was an instantaneous sensation of a shudder throughout the ship, accompanied by the sound of metal bumping into metal, just as if the hull were collapsing.

Trevor prompted a medic team to the docking bay.

Trevor looked to Mao-Koi. He didn't like the curious squint in Mao-Koi's eyes. Without turning to his chief security officer, Trevor said, "Send three teams to escort the medics."

The Mask of Rogue 7 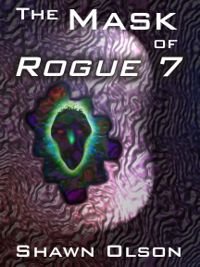 The crew of Rogue 3 were sent to Jadus to find out what happened to Rogue 7. They found something horrible.