For some people art is a way of life. They live and breathe art. When they look at a majestic landscape they see more than mountains and trees and birds. While walking down a foggy street, they see more than fog and misty shapes. What they see can verge on the spiritual, as a simple environmental impression can leave in these artists a numinous sensation that changes the way they feel and think.

One of those artists lives in the Westgate area and teaches art at Bexley High School. Mabi Ponce de Leon was born and raised in Argentina until she was eleven. She had several artists in her family—a great aunt, uncle, father, brother—who more or less made art a commonplace in her life.

Perhaps her removal from Argentina to a completely different culture in America has driven Ponce de Leon with a unique perspective in her art. "I have always wanted to paint about what it feels like to ‘be’ from two places and belong to neither. I feel both foreign and at-home and in the world.”

But after a while talking to her and looking at her art, you get the feeling that she’s not so much an uncomfortable person as she is curious and awed. Her "foreign-ness” seems more like a child’s curiosity, as she seems to be looking around the world for new and amazing things to find a better understanding of the world in which she lives.

Her specialty is oil painting, but she and her husband Christopher Yates (a CCAD instructor) recently had a girl named Sophia. Ponce de Leon put aside paints while pregnant to work with less toxic mediums such as pencil, charcoal, pastels and other expressive tools. Motherhood has affected her art tremendously.

"It has completely changed my world.” Juggling careers in both art and education are difficult when you have a small child to nurture. During Sophia’s first year, Ponce de Leon produced no art. Nonetheless, said Ponce de Leon, "She is my little miracle. Creating a life is a powerful experience that has provided new ideas for work. Now, I have first-hand knowledge. I was already interested in themes relating to origins and creation. Mother-goddess and fertility motifs (based on older religions on which modern-day societies are based) appear in most cultures and remain in our lives, in our speech, and in our minds. The fact that women could give life was proof to the ancients of the existence of a higher being and of the power of woman.”

Having moved away from oils for a while, Ponce de Leon has experimented with mixed mediums. These pieces have culminated in an upcoming 2-person art show called "Mixing It Up” at the Delaware Arts Castle. Ponce de Leon is exhibiting several pieces along with pieces from her Delaware friend Lynda Elias.

Ponce de Leon’s pieces are searches for origins. Layered "collages” that use mixed mediums from pencil, charcoal, pastels, oil paint, ink and photographs create the illusion of a dreamy mysterious revelation. Her early studies of biology in college seem to have come together with her newfound fascination with human reproduction, as her newest series is a journey from conception to birth. Some of the images are hyper-realistic, paying great attention to anatomy and detail. Others seem to be half-conscious images from a dream, like ancient legends trying to wake up and share a message but unable to speak our language.

Fascination with origins has also been influenced by her travels. Ponce de Leon and her husband taught art in Monterrey, Mexico for a year. Living in an arid mountainous region alone inspired the artist, but the history of the area was influential in creating a new subject. Ancient petroglyphs and ruins became themes in much of her art.

"As you can imagine,” said Ponce de Leon, "I began painting mountains and ghost fish swimming in dry streams along the mountains, huge mining scars and petroglyphs, etc.”

When she came to Ohio, another connection to history stirred her. The famous prehistoric Indian mounds of Ohio were built in the same age as the temples and carvings in Mexico. Ponce de Leon found herself painting a Van Gogh-ish rendition of the Serpent Mound, which will be in the Delaware Arts Castle exhibit.

What is all this art for? Ponce de Leon said, "I see my work as a place to house my spiritual feelings … those which I cannot describe with words, but only with sensations.” She feels a sense of remorse for the widespread sentiment among American adults that art is an esoteric field that is off-limits to the average citizen. "Art is not for the elite… it is for all.”

When it comes to teaching, Ponce de Leon said, "I never push anyone to go into a field they’re not interested in. I was trained as a fine artist but I value all the art fields. One cannot be successful at something if one’s heart is not in it.”

Her advice to young aspiring artists is to develop life-drawing skills. Keeping a sketchbook is important, she said, regardless of the intended field of art. Ponce de Leon said, "I tell [students] to start with an all-over gesture, use the entire page, develop a wide range of values, and look look look at their subject.”

Getting people to appreciate art is important to Mabi Ponce de Leon. "Art is a vital part of humanity. Cultures from the beginning of time made art that was decorative, spiritual, religious, political, meaningful, and reflected their societies.”

Ponce de Leon said that one thing she’s learned from her travels is that people are pretty much the same, no matter where you are, despite different languages and clothing and religions. She hopes that her art can instill a little bit of this truth to viewers.

"I think we all have common origins. Differences are very cosmetic, if you think about it—very superficial.”

Mabi Ponce de Leon stands by a mural painting in her studio basement. 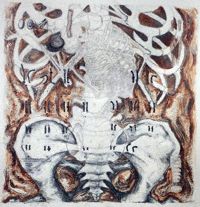 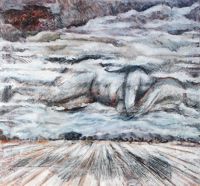 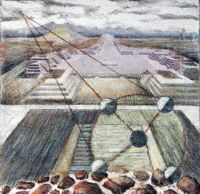 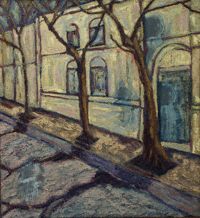