Bob Mauk, purring his heart into his work

This interview was done in July 2001. The article originally appeared in the Westside Messenger.

"God gave everybody something, and each one of us has an opportunity to do something with it,” said Bob Mauck.

That something for Mauck is art, and at 78 he’s actively doing something with it.

He’s a wildlife artist living on the westside of Columbus. He keeps a display at Keepsake Crafts and Collectibles at 4422 Crossroads Center, which is on the eastside. His specialty is animal portraits.

Mauck said he’s always been artistic. He drew a lot as a kid. His interest in wildlife started the first time he went to the zoo—he fell in love with tigers. It only takes a glance around his studio to see the love hasn’t faded. Tigers make up a large portion of his personal collection of pieces.

A closer inspection shows that Mauck has done more than love the animal—he’s studied it tirelessly. All of his works are rendered in pastels, but there is an aura about them that is more realistic than what pastels usually produce. The pictures almost seem to bear living creatures that will turn their heads to watch you pass to the next image.

The effect is alluring. While he has plenty of experience with art—he worked as a freelance artist most of his life and taught art at Hayes Technical School for thirty-one years—there is something deeper to his work.

The moment you sit down to talk with him, you understand what it is that is in his art. His eyes light up and his arms get energized as he tries to express what drives him in his work.

Mauck said, "I don’t want any of my work to be sensed as drawings or photographs. I want my animals to breathe.”

Mauck showed a drawing of a tiger, its eyes staring off to the left in a menacing intent to ward off competition or take down prey. Mauck said, "This animal is so beautiful. But his face is too menacing for what I want here.”

He motioned to a sketch of the same tiger, its face tilted more forward and expression more serene.

"What you see,” said Mauck, "is the very feeling I had when I first saw the picture.”

Mauck said, "I want you to feel the animal’s breath, or to grab its attitude.”

He does not keep a catalogue of his work. Once it’s sold, a piece is gone. Mauck said that photographs of his work don’t have the same feel as the original.

Mauck said, "The camera doesn’t feel what I feel when I bring these images to life.”

"The important thing,” said Mauck, "is that if you want to excel, you have to put your heart into it.”

The fact that Mauck has spent his life in a dedicated pursuit of his skill is proof that his heart is in his work.

Mauck repeatedly says, "It’s what I do, not who I am.” But you can’t help but respect the man for his devotion.

Noting the well-known disdain the art world at large has for wildlife artists, Mauck said, "I am no fine artist. I am a wildlife artist—never to be recognized in a museum.” It doesn’t seem to bother him though.

"I get more enjoyment out of people buying my work than anything else,” said Mauck.

Doing all of his work through Keepsake Crafts and Collectibles, Mauck is on hand to put some artistic life to anyone’s pet. He will do any animal, from dogs and cats to anything else someone wants. He’s even done whales.

Mauck likes to have two weeks to finish a piece. While he usually doesn’t need that much time, he’s such a perfectionist that he will throw away his work if it isn’t up to his standard.

Commissioned work runs from $60 to $375, depending on the type of subject, number of subjects, and size of the picture. 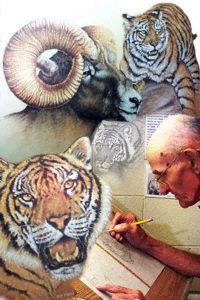 A collage of Bob Mauk and some of his wildlife art. 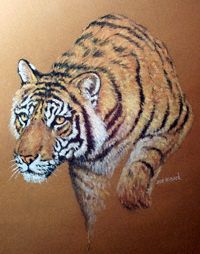 A tiger piece by Bob Mauk. 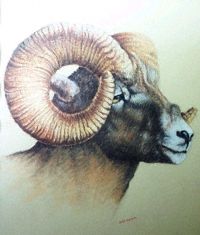 A ram piece by Bob Mauk. 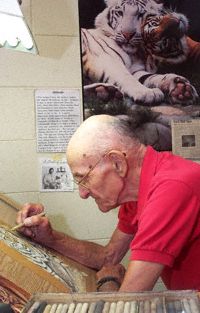 Bob Mauk finishing a tiger piece in his art studio.