Suprise! I'm still here, although more than two years older since the last time I shared a newsletter.

I've slowed down the generation of content on my website, though I keep it up every couple of months. But I haven't slowed down overall--I've been heavily involved in other projects like the rennovation of the Webonizer Content Management System, the Wall Worm Model Tools for 3ds Max and more.

The biggest change in my life since the last newsletter involves my Dad. In late 2011 he started to have some health problems. Within a span of a few months, he went from a vibrant and robust man to a very weak, elderly man. His strength simply vanished, and he started falling. A fall that brought an ambulance forced my Dad's hand to get some medical attention (he was averse to doctors and prefered to address problems with faith); the news wasn't good. He had stage 4 prostrate cancer. 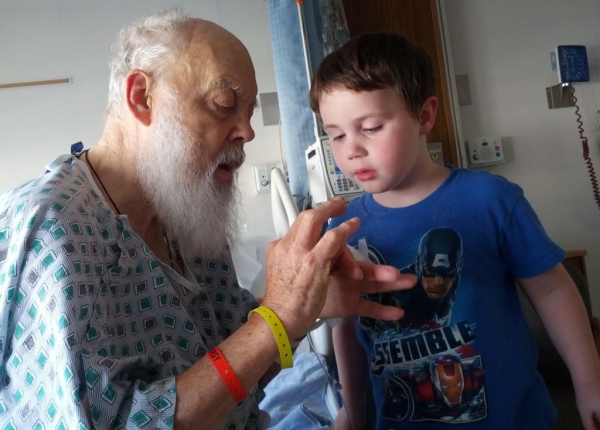 Photo of my Dad showing my son a thumb trick during a stay at the hospital.

In early 2012, Dad moved in with us. Both Dad and I knew that the writing was on the wall, but honestly I thought we still had a few more years together. It was a big adjustment for the whole family, but the greatest challenge fell on Dad. His independence was gone and I know that it was hard for him to transition to using a walker and needing almost constant assistance; Hospice helped us tremendously, and we had a nurse here almost daily to do puzzles with him.

It was very painful for me to see him change. Although we initially treated him with therapies to slow down the cancer, it was far more advanced and aggressive than the oncologist initially diagnosed. The cancer spread to his whole body. As the doctors explained, the cancer had diffuse dispersion in his bones and even his brain and other organs. And I watched Dad decline. All I could really do was share time with him and special treats like foods he liked. His daily ritual of updating his calendars and following his friends on Facebook vanished, and by November of 2012 he forgot how to use his computer.

Dad died on March 18, 2013, just four days shy of his 73rd birthday. My sister Faith was in town. She and I both knew it was the last day we would be with Dad. We could just tell. So we called my brother Eric. We took turns sitting with him, holding his hand as he stared back into our eyes. He struggled to breath for a few hours; the whole time he kept telling us that he loved us. I told him how proud I was to be his son.

I was carresing my Dad and Eric was holding his hand when he took his last breath.

What can you say about death? It is such a painful and terrible thing. Most people deal with it by wrapping meaning around it with faith and religion. Dad believed that his death was not an end but a beginning of a new phase. Those beliefs are not part of who I am... so I deal with it in other ways. The only comfort I can get is knowing that Dad did not die alone and that he was surrounded with love.

I recently talked, in turn, to my friends Brian and Brett Atherton. We grew up together. And although we grew up in homes that could see each other's front door, we essentially grew up in completely different worlds. Their father died several years ago. And I never remember them mourning or sad. Both explained to me that they simply weren't close to their father. Even after many years, they feel no loss. Their father never expressed interest, love, discipline or kindness.

Contrast that with my Dad. He (and my Mom) included us in so many things. They hugged us daily. They disciplined us when we needed it. They took us to parks, on fishing trips, on trips to other states and lands (not that there was a lot of money... but doing things together was their priority). Dad read to us in the evening. He reminded us to be good and to strive to be good.

Depsite his flaws (as all of us are painted with some kind of imperfection), my Dad was a really great person. And he did an exceptional job at being a kind and fair person. He was certainly more devoted and involved than the fathers of many others. Proof of that is that I will always miss him and wish he was still here.

I was going to share some other thoughts on topics like math, 3D and more... but this is already long. Maybe I won't wait two years for the next newsletter.

Shawn, I'm sorry to hear about your Father. Been there, done that, as you know. 10 years next month. Where has the time gone. In going over my Basket...of cards, e-mail address, etc. I found your web site. I still have your pictures taken at the Property........Always Welcome Inn. or Welcome Tree
Plantation. I think of various Lodging customers, and still in contact with several and we get together. Those were Positive times for us, and Hopefully you and Family. How is Virginia? I'm still here in Holmes County. Hope all is well with you. Sincere Thoughts...........Nancy A. Miller.
Live in the Moment. Loved your pictures of the property, and the one where your wife caught the fish.

Hi Nancy! Thanks for the email. Of course I remember you and the Always Welcome Inn. My Dad would have loved the Inn.

I have fond memories of your place!

The kids are growing and starting to leave the nest. Virginia is doing well. You can find here on Facebook :)