My Adventure with Onkel Sven. 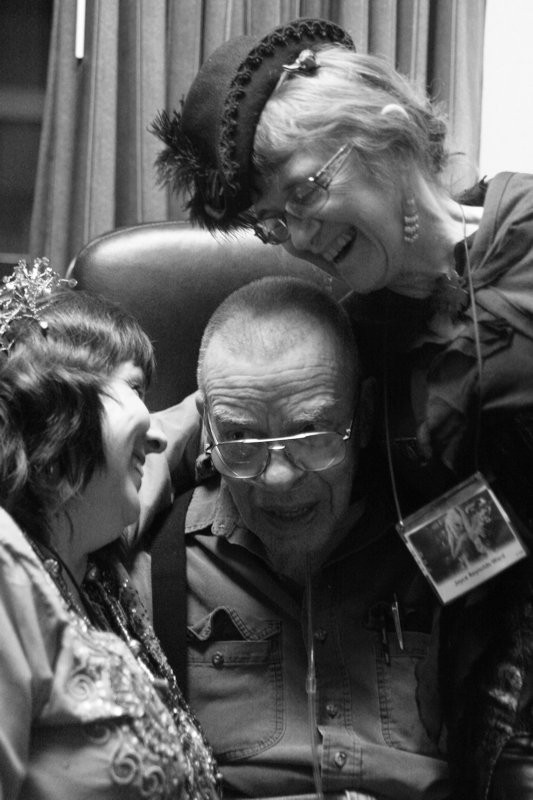 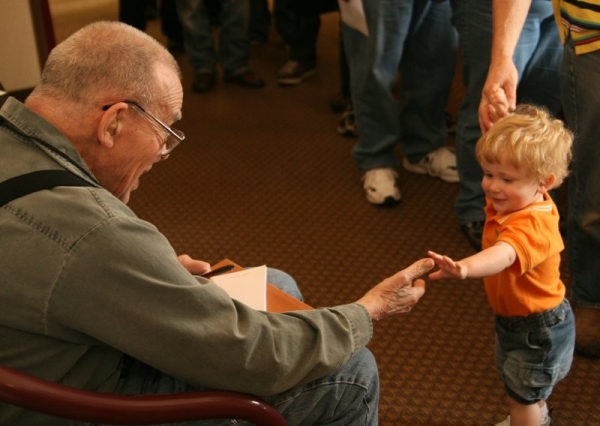 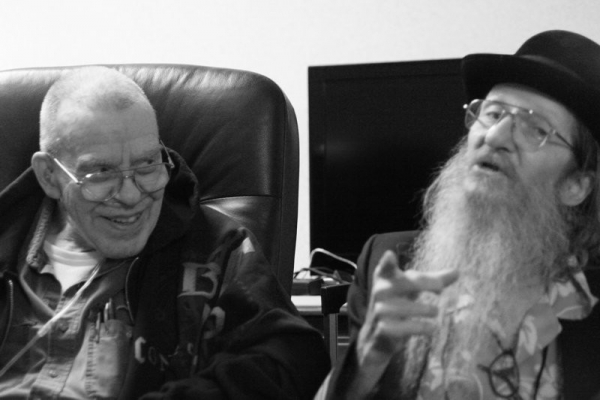 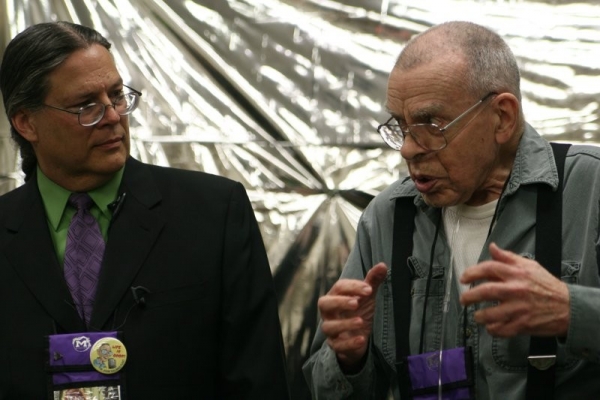 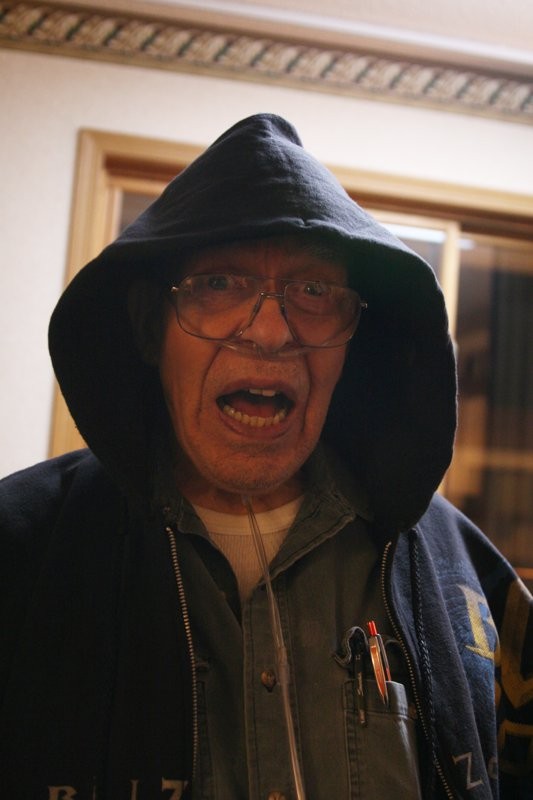 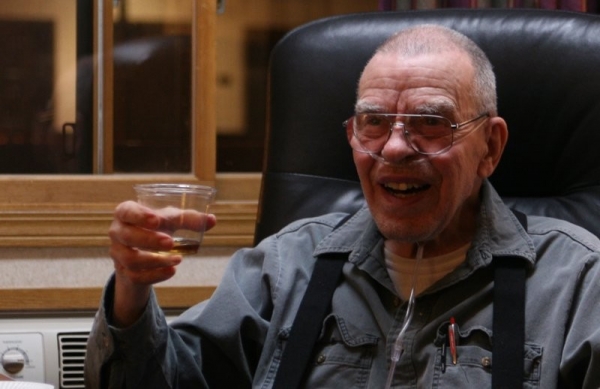 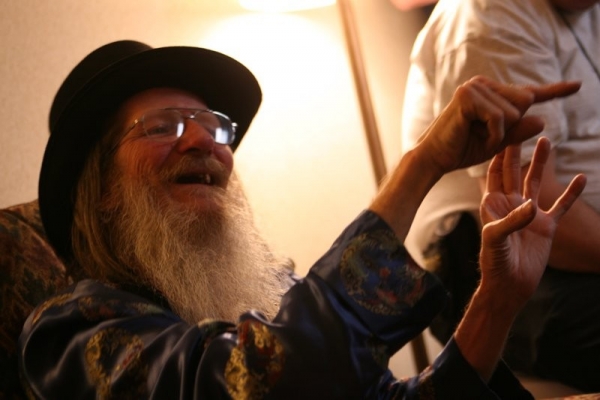 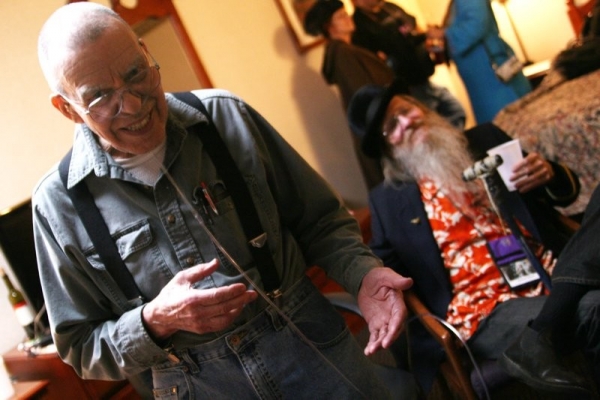 Several weeks ago I got a phone call from a special friend of mine. It was John. Most people that know John know him as John Dalmas, the name that accompanies his large collection of published science fiction novels. But he has several aliases. For some people the array of other names might speak of some shady past; for John, I think, it's a result of having too rich of a past to store in a single name.

John/Casey/Jerry asked if I'd like to accompany him on a trip to Missoula, Montana to participate in Miscon 25 (a long-running annual sci-fi convention). John is getting up in his years; traveling might be easier with a companion. Plus, John said, the travel and hotel accommodations would be provided by MisCon.

Normally my time with John has been sitting quietly at his home with a glass of brandy or such; I listen to John's unending supply of stories. John never seems to run out of things to say. Sometimes his stories delve into his rough childhood (he lost his father at an early age) and lived with a grandmother whom the grandchildren knew as "Grandma from Hell”; but despite the turmoils of that time, he always has a wise perspective on it, and talks with great admiration of an Uncle Al... and I can tell that John's uncle played an important role in the development of the sage we now have in John Dalmas. Other times John talks about working in the boats of the Great Lakes or forestry or Swedish history or... or just a long line of things half-forgotten in our Age.

When we got to MisCon and I watched John interact with everyone, I started hearing a lot of the same tales that John has told me. But there was a difference. Now there was an extra something that I couldn't put my finger on immediately...

Now MisCon itself was a pleasant surprise for me. I spent a few years working as a journalist and attended plenty of conventions and public gatherings that gave me a certain set of expectations. Usually you attend a public gathering as an outsider only to remain an outsider. As someone who is naturally semi-aloof, I expected to remain outside the inner circle. With several hundred attendees, it seemed that I would be observing a bunch of cliques from afar as I tagged along with John—a presumption that was repeatedly falsified at MisCon.

John had hinted as much over the years—that the fans out West were much more welcoming than here in the East. Almost immediately I realized there was truth in it. Everyone seemed to know John. I tried to slink back and watch as one after another someone had to come give John a hug or shake his hand; but even my attempt at getting out of the way was futile as people warmed up to the guy who helped bring John.

After a while I started to realize that for many people here, John was an icon. And I realized that many people were poignantly aware that they might not get too many opportunities to see John again; as John pointed out to me, his time attending these conventions is approaching an end.

I've watched John over the last few years slowly decline physically. He walks a little slower and less steady; he has to have oxygen supplies now. Despite that, his spirits remain high and he keeps a cheerful gleam in his eye. His personal view is that we live to learn for some higher purpose; he expects to be born again in the future into another life to learn new things.

I'm personally not convinced that John is right on that... but that doesn't really matter. What does matter is that I'm glad that I can call John my friend and that I got to see John at MisCon. He seemed energized with all the camaraderie and love; he wore me out chasing around all the panels of writers or staying up late to drink and share stories with his old friends.

Exuberance. Acceptance and warmth. Those were some of the things I started to see in John more than ever before... the extra elements that started to come out in John's stories as he was surrounded by people that adored him. I've always known John to be a good man; now I know that along with his sense of wisdom is an even greater heart that, luckily, seems to be infectious.

PS. I want to pay special thanks to Robert Lovely for arranging for me and John to get to Missoula. Bob's name is rather fitting as he is a lovely person... and I hope to someday get to learn a little more about him.

I personally made several friends at MisCon. I'm not sure when, but I am sure that at some time, I'll have to visit again.

We have tales to share, you and I, with the world! Seldom does an opportunity come along like this ... I have a pocket recorder with HOURS AND HOURS of conversation on my round-trip with him, but don't have the time to transcribe it ... donate it to SpoCon? Seems like the exciting, silly, phannish thing to do, sorta ...

Stuck in the airline terlet, that wasn't fun, but the rest was AMAZING!! He's a total babe magnet AND HE KNOWS IT!!

As one of the ladies in your picture of John, I thank you! Thank you so very much for making it possible for John to come to Miscon. Every moment we get with him is worthwhile, and I will sorrow when the time comes that we don't have John to enliven Radcon, Miscon and the other Western conventions that he has been such a part of over the years.

Thank you for accompanying John. I was so happy to see him and enjoy his company one more year. Hope you get to come back soon.

I'm glad I stumbled across your article -- very heartwarming! I posted it to the Miscon FB page, where others will enjoy it also.

You'll be welcomed bac any time. It was great to meet you!

Thanks for escorting John to Miscon.

Robert Lovely and John Dalmas bowing to each other in closing ceremonies.