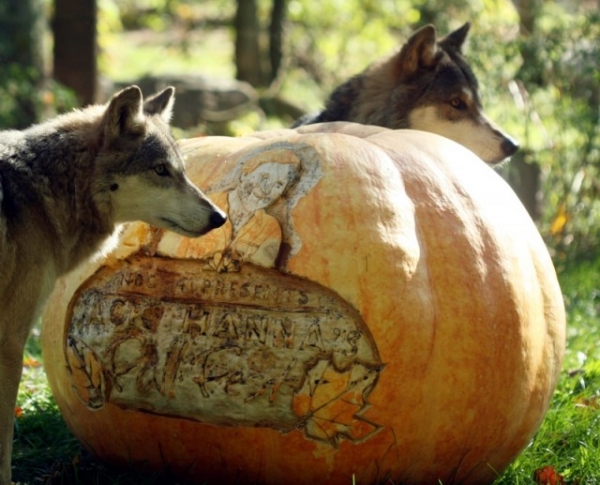 These photos and video clips of wolves were shot at the two wolf exhibits at the Columbus Zoo. The wolf attacking the pumpkin is a Timber Wolf; the pumpkin was a display for the Jack Hanna Fall Fest. I presume the event was intended as a photo-op as there were a few zoo personnel there with cameras.

The second video is of a pack of Mexican Wolves. When visiting the wolf exhibit, it is good to come early in the morning if you wish to see activity. Here there were several wolves interacting… including a few skirmishes that seemed to be a dominance ritual—but I am no expert. On some mornings they make a wonderfully haunting group howl.

According to information gathered at the Columbus Zoo and other online resources, the Mexican Wolf was on the verge of extinction. According to the Columbus Zoo website, none have been sited in the American wild since 1970 and in Mexico since 1980. There have been re-introduction programs to establish this native predator into our wilds again, but I have not found enough information to gauge the success of those efforts.

Photo of a couple Timber Wolves around a pumpkin display at the Columbus Zoo.

Photo of a Timber Wolf around a pumpkin display at the Columbus Zoo.