I watched a National Geographics special on Saddam Hussein’s regime this week and was moved to think about the chaos of our world. An especially gruesome clip of executions caught on tape rang through my head and played part in a nightmare I had a couple nights later.

I’d like to think that mankind can get past this stage of brutality. The optimist in me says that someday…

But the realist in me sighs and shakes his head.

Our built-in psychology will always throw us back to primitivism. Xenophobia, sexism, racism and greed are hard-wired into us… and no matter how much we try to get free of it we are reminded in a flash how much we can change. A civilized man reverts to barbarism with only a spark of jealousy; a religious man falls to a glimpse of beauty; a simple and honest man falls for greed with the wave of green paper.

America is not so much different from the rest of the world as we assume. We like to think of ourselves as more advanced and more civilized… but we are simply more fortunate. The nuts and the beasts occupy our lands with the same frequency they live elsewhere… we can ignore them here more simply because we are all –beasts and sheep alike—more satisfied.

At the 2004 fireworks display this year I thought about some of this. A few hundred thousand people swarmed into a few blocks of downtown Columbus. Millions of dollars went up in a few moments to fill the pride of people who probably had nothing to do with the purpose of the celebration; charlatans galore filled the sidewalks to sell bottles of water for ridiculous prices to thirsty crowds; pickpockets hunted; and zealots with apocalyptic pronouncements damned the entire population.

I’m happy to live in America because of the opportunities it affords. But I don’t think the pride felt by the masses is justified. We have men who are equivalent to Saddam Hussein and Osama bin Laden here; we have tyrants and fools leading masses as much as other countries.

It’s a crazy world. The realist in me knows it. Still… I am trying to keep the optimist alive. 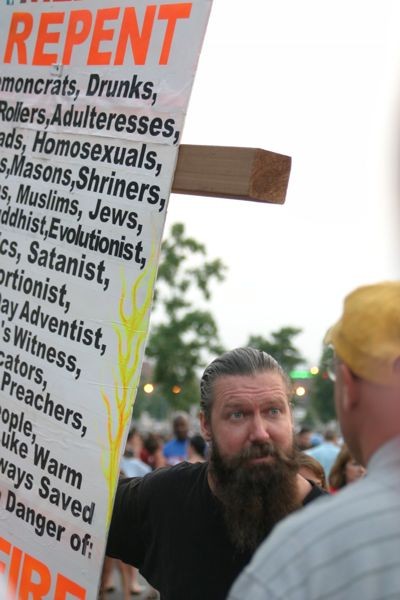 I later saw the murder of Eugene Armstrong. It was something that made me even more pessimistic.

Essays, commentaries and cartoons about the American War on Terrorism arising after September 11, 2003.