The praying mantis is a fascinating creature. It is one of those insects that is both bizarre and creepy. Everytime I see one I am immediately drawn to it; every time I let one crawl on my arm, I am both amazed and (admittedly) somewhat creeped out.

I've kept mantids as pets. There was one I kept alive until mid-January. Although they're only insect, there seems to be an alien intelligence about them when they turn their heads and direct their multi-faceted bulbous eyes at you.

I remember one occasion when I was a young teenager helping my father on a job. We were helping move a camper out of a field that was infested with large mantids. The insects were flying around like swarming ants; it frightened me at the time, especially when one of the large creatures landed on my shirt or face. Now I'd like to photograph another such display.

A large praying mantis climbing on a thistle. 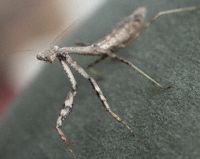 A speckled mantis perched on Jenny's back. 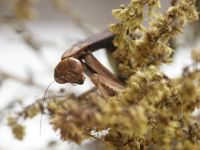 A dead mantis still seems like a menacing monster in this dried plant.

This green mantis contrasts with my oak desk. 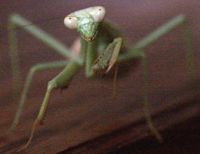 Another view of the green mantis on my desk.