Most regular readers of this newsletter and visitors of my site may have noticed a scarcity of new content over the last few weeks. This has largely been due to workloads and projects that are not quick-and-easy.

I forced myself to go out and get a few new photos for the site this week with diversions to the Columbus Zoo and the National Museum of the United States Air Force.

I do want to share with you an update about an article I posted last year called Scams to Make You Feel Cool. The article has generated a lot of emails since posted; others were treated the same way I was when approached by Manchester Who’s Who.

My article equates Manchester Who’s Who (and Poetry.com) as dubious businesses that make money from non-critical clients. Manchester Who’s Who, for example, charges to be listed in their directory—and provide you with a plaque and media kits to show off your accomplishments; of course, their marketing technique is to make this seem like you are being honored rather than just buying a promotional service.

A couple weeks ago I received my first email from an employee of Manchester Who’s Who. The individual was not happy with my article, and she asked that I clarify that the article is my opinion. I later received an email from a law office ordering me to "cease and desist” the article.

Well I honored the employee’s request and clarified in the article that it is only my opinion that Manchester Who’s Who is a scam; that my definition may not fit the legal definition. But I am ignoring the law office to remove the article outright. When a company tries to infringe on free speech with lawyers, it further reinforces my feeling that the company is less than legitimate.

In my opinion, someone at Manchester Who’s Who is upset that my article comes up on the first page when searching for the company on Google.

In other news, clients and members of sites on my server may have noticed a total lack of emails in the last few weeks. That was because we found a hole in a couple old programs that spammers were exploiting to send unsolicited bulk emails. Spamcop listed us on their block list for a few days, and emails from our server were being blocked from thousands of servers around the world.

We found the security hole and patched it. We are now off block lists (though AOL is still gating the amount of mail we can send to their subscribers at any one time).

Finally, I am going to launch GoodGuest.Net sometime in the next couple of weeks. This online guestbook site will feature systems that I have been developing over the last few years. 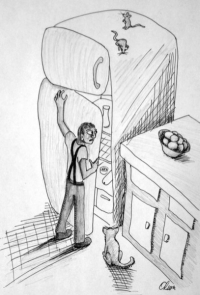 A young Erwin Schroedinger tackles the age-old mystery of the refrigerator light.

Photo of a snake at the Columbus Zoo.

A photo of a snake coiled up in its display at the Columbus Zoo.

Planes hanging from the rafters of a hangar at the Wright Patterson Airforce Museum.