It’s the last line in a song called "Junk Food” by a Columbus based band called Chuck’s Junk. Replete with an orange-suited industrial getup, the band is composed of eight men ranging in age from sixteen to forty-nine. They offer a unique blend of music for aficionados wanting a new taste for their musical palate.

The first time you listen to the group, you’ll try to classify them as… well you won’t be able to classify them. With guitars and drums and trumpets and vocals and saxophones and even a flute, the musical cacophony is somehow pulled together into a harmonious rhythm that is specifically intended to stimulate dancing. Influenced by such a varied musical array as blues, hip-hop, rock and funk, the band attempts to create a sort of e pluribus Unum of music.

Guitarist Bill "B-Ill” Patterson III notes that he’s been influenced most by bands like Tool, Rage Against the Machine and Van Halen. Patterson’s father Bill "Felonious Junk” Patterson Jr., notes such influences as The Beatles, The Animals, Yes, Sly and the Family Stone and The Doors among others. Each of the other musicians has their own separate genre, their own source of inspiration.

Patterson III said, "It’s not an easy process to say, out of all those influences, who do we want to sound like?”

While the group contends its eight-man collaboration is what usually causes the songs to fall together, most of the band’s lyrics are by vocalist Napoleon Stevewil. Stevewil is the only member of the band with a name so unique that he doesn’t carry a stage name. His roots, according to the band’s website, are in soul singers like Marvin Gaye and Stevie Wonder.

So how do they do it? How does a group of guys, all creatively impassioned and all varied widely in their vision of music, get together and work coherently on an integrated process like making music?

Patterson III said the group would probably come to a head-on collision if the members tried to write a song from scratch as one integrated unit. The real process, he said, usually involves someone coming up with a pretty defined idea that is presented to the group. Then the collaboration begins, as everyone adds to the pre-formulated concept.

Patterson Jr. said, "I think that’s how we come about developing a unique sound of musical style.”

Patterson III said, "We’re kind of proud of that.” Commenting on the sort of musical menagerie his group bangs out, he defined the band’s musical product in the only fashion he could: Chunk Music.

Patterson Jr. said, "Just like you, we’re unable to peg a style to it. We don’t want to sound like anything from any previous period. We’re trying to forge our own style of music by blending everyone’s style of musical influences.”

Stevewil doesn’t seem so amazed that the band meshes well. He said, "Music is music. My source of inspiration is just a good harmony.”

You can feel the energy from the band, you can sense the aggravated poetry in their lyrics. "Never dismiss my aggression/ To be simply an attitude”.

The band has attitude, but you can’t always tell where the attitude is going. The band seems to feel that this approach is a fresh perspective on the expression of audio arts. But it may also prove a roadblock to the band. Local radio stations aren’t sure how the music fits into their schedule because they can’t be sure what kind of music Chuck’s Junk is.

But the band is going to keep hammering away at making music. The band certainly won’t give up because success is a long process. They’ve come this far—putting together an impressive home studio, compiling CDs, running a website—they plan on going farther. Even if they seem, on the surface, musically confused.

I feel sometimes I don’t know what I’m doin’
If I chose the right thing to be pursuing
I’m losing, It’s not amusing
I wanna change my blues to green.

Now about that name … without apology they shrug and say it’s the best they could come up with. 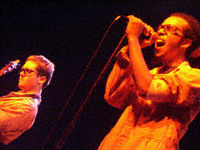 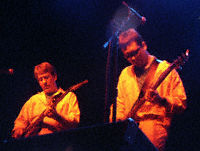 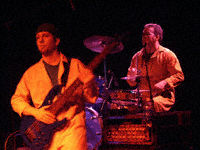 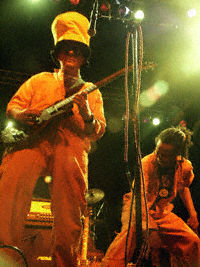 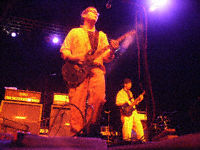 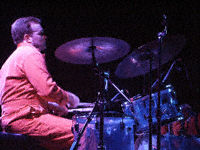 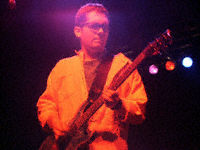