CandleWatch - Rekindling the love for candlelight 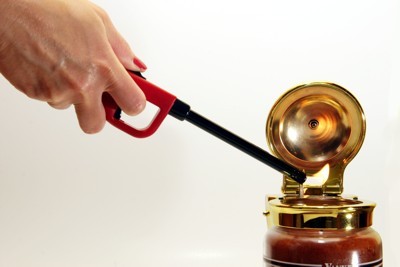 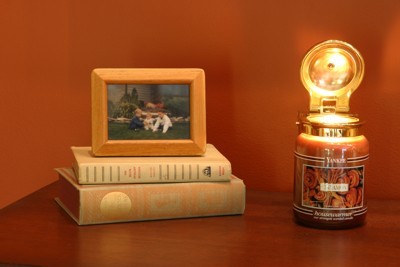 Greg Hart was en route to Wisconsin as part of a team looking for a new pastor for his church, Cypress Wesleyan in Galloway, Ohio. It was during this time a moment of creative opportunity captured him that has the potential to save lives around the world. During flight, Hart flipped through a Newsweek magazine and stopped on a picture that literally changed his life. The photo of a fireman carrying a dead, two-year old boy from a home haunted him… and the reason for the death stirred his mind.

A candle had caused the fire. The article blamed the candle industry because it hadn’t done enough to make candles safer.

According to the article, there was not much protection for consumers beyond simple vigilance; most fires start when users forget about the candles they burn.

According to the National Fire Protection Association (NFPA), candle fires have been on a rise in the United States since 1990. A reported 5,460 home fires were caused by candles in 1990. By 1999 (the latest year the NFPA has statistics for at the time this article was written), there were 15,040 home fires caused by candles, leading to 102 deaths, 1,473 injuries and $278 million in damages.

John Hall, assistant vice president of Fire Analysis and Prevention said, "Candle usage has been exploding and it’s clear that too many candle users do not know how to use them safely. With candle fires and losses rising so rapidly, it is time for candle manufacturers and the fire safety community to get together to find ways to make candles safer to use.”

According to the NFPA "Candle Fires in U.S. Homes” report, candle fires were not only on the rise, but their lethality was increasing. The report stated in bold, "Candle fires had a higher death rate per fire than most other fire causes.” Between 1994 and 1998, the average number of deaths per 1000 home fires was 8.6. For fires caused by candles, the average was 12. The report also stated, "Young school-age children had higher death risk from candle fires than from other fires.”

Inspired from the Newsweek article, an idea came to Hart’s mind, and he scrawled onto a napkin the original CandleWatch while flying at 33,000 feet in the air. The invention was simply a timer-driven lid that sits on a candle and closes after time ran out.

"I couldn’t believe something like this hadn’t already been invented,” said Hart.

The night he returned to his home in Central Ohio, Hart put together the first prototype with items in his home—a canning jar, rubber seals, a brass ring, a hinge and his wife’s grandmother pointer from a crock pot.

"I showed it to my wife first,” said Hart, "and had to be very creative in my explanations. Believe me, it was far from beautiful.”

After demonstrating how it would work, Hart set out to get a patent and prepare to market CandleWatch. He called several law firms to get advice. But no one called him back. "No one had any faith in the idea,” said Hart.

No one listened until Hart ran into a young lawyer with Sterne, Kessler, Goldstein & Fox named Jason Eisenberg. Eisenberg was immediately impressed with the idea.

Eisenberg said, "It was so simple, yet so innovative. It seemed like a really good idea, something that could really make an impact.” Like Hart’s encounter with the Newsweek article, Eisenberg had been influenced by media reports of candle fire disasters.

Eisenberg did a patent search. The results were surprising for Hart and Eisenberg—there was absolutely nothing like this. While candle snuffers had been around for ages, all existing patents had been for devices that were not designed for the modern candle properties. Previous snuffers were largely designed to fit on stick candles, which have gone out of fashion in lieu of jar candles. Other designs had been overly complex.

Hart needed the encouragement. Before meeting Eisenberg, few took the idea seriously. Either people assumed something like this must’ve already been made or that a realtor couldn’t be a serious inventor.

Hart said, "I could’ve stopped on this idea twenty times… Jason, along with my wife, was a huge part of keeping me focused. He gave me the confidence to go forward.”

Hart applied for a patent and hired an engineer to build a working version of CandleWatch. Expecting to sell the idea to candle makers and collect royalties, Hart arranged meetings with some of the largest candle manufacturers in the United States.

"They all said the idea was great,” said Hart. One of the largest candle companies said to Hart, "Shame on us for not thinking of it.”

There was irony in the elegant and protective design of CandleWatch--its very purpose was to add an element of safety and protection to the activity of burning candles. No candle manufacturer wanted to admit that their products were dangerous.

Hart was not deterred. When he realized that the candle companies weren’t going to buy the idea, he decided to sell it himself.

CandleWatch went through several prototype phases that were all metal. Eventually, engineers found a way to make the design almost featherweight.

The design allows the CandleWatch to fit on a wide range of popular candle brands, including Yankee, Empire, Bridgewater, Salt City and more.

"I’m just ecstatic about this,” said Hart. "The engineers did a superb job—they turned my idea into something that is elegant. It’s just beautiful. I really feel like this idea will not only help make candles safer, but also enhance the natural beauty of candles.”

Safety is the real heart of CandleWatch. Even so, Hart is adamant about the need for education in any home where candles are burned. "No matter what,” said Hart, "You just never want to leave a candle unattended. I designed CandleWatch to help add some peace of mind and a layer of protection… but you still have to be smart.”

Several organizations and government agencies provide free educational resources on proper candle safety techniques. The NFPA and the National Candle Association are only two of many organizations that provide safety tips for candle use. The best tool for safety seems to be simple common sense. Repeatedly stated on all listed recommendations is to keep candles under adult supervision and to keep candles away from combustible materials. Candles are not supposed to burn more than three hours, which is one benefit of CandleWatch—it will snuff out a flame after the variable timer runs out, which has a maximum limit of three hours.

Keeping candles on sturdy furniture is another common recommendation, as well as keeping them well out of the reach of children and pets.

"What I’m hoping,” said Hart, "is that candle lovers will see CandleWatch as a beautiful enhancement to their hobby. At the same time, I hope it will have an impact on lessening some of the tragedies that can happen when candles are used in the home.”

More information on CandleWatch and links to candle safety sites can be found at http://www.candlewatch.com.

Note to Readers: The CandleWatch website was originally developed by this author (Shawn Olson) and coworker Andrew Penry.

I would like to no where I could get the candle watch extinguisher with timer. Please let me no and send price also. Thanks so much. 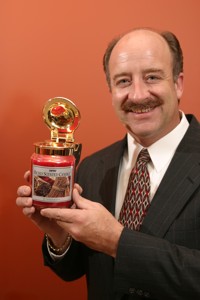 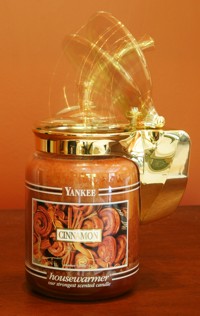 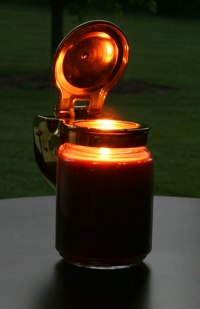 A CandleWatch gently illuminating a table with candle light. 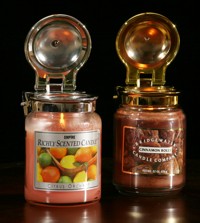 A chrome and brass candlewatch on a couple popular candle brands. 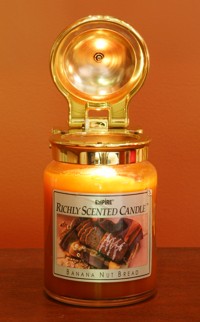 A candleWatch on an Empire Candle. 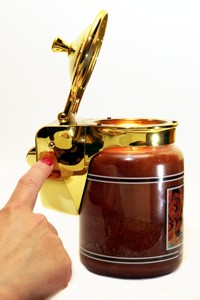 The button on the side of CandleWatch that will close the lid before the timer runs out.