When considering the new status of American security diligence and the sudden war that spurred our cautious state, the reasons for our caution seem obvious. They are. Ignoring the expectable surge in patriotism, Americans have changed subtly in other ways, and not all of them are healthy.

The great fear of the free thinker is that, as in practically all past war scenarios, a high degree of intellectual and moral prejudice stomps down on society. The act of war against America puts to the forefront the seemingly paradoxical philosophy of absolute freedom in thought, speech and religion—and none of us for a moment doubt the need to crush the terrorists for their actions.

It’s hard to separate the actions of terrorists and their beliefs. Most of us cheer the government’s decision to hunt down terrorists—even those that have yet to commit crimes against us. We realize that certain cults and groups (founded upon radical creeds of hate) are liable to harm us, so we lash out.

It doesn’t seem to fit with the American philosophy, and it contradicts the first amendment to the Constitution of the United States. The obvious contradiction does not bother us, though … Why?

The reason is that while we uphold the belief in religious freedom, our enemies don’t. When our enemies do not live by the same standards that we do, we cannot help but retaliate in a fashion that is philosophically distasteful to our spirit. Self-preservation is a higher priority than philosophic consistency—for without our security, there is no chance for freedom down the road.

The true challenge to America is in regards to our cultural landscape after the war is done. Will we go back to realizing the need for our open society? I believe the terrorists want to destroy America, and while they’d rather see us dead, they would probably get a strong sense of satisfaction if America loses its free identity.

A natural reaction to the war would be to heighten our prejudices, to censor the press and indoctrinate the young. That’s human nature. But it’s not America.

The fact is that our soldiers always have fought for America—for the ideals of liberty. Most of our greatest patriots have been open-minded. Our heroes saw in this country a noble seed. And one of our most noble traits has been our freedom.

We need to stay free; because the alternative looks too much like the dreams of petty bands of vagabond camps scurrying into caves half a worlds away.

Our dilemma is that our hunt for subversives strikes a note that doesn’t harmonize with the foundations of our country. You have to wonder what Jefferson would have to say about the new threats to America. Would the authors of the Bill of Rights revise their initial creed in light of terrorism mixed with chemical and nuclear weapons? Certainly, everyone’s safety around the entire world would be safeguarded more effectively if there were no allowances for terrorist thoughts. 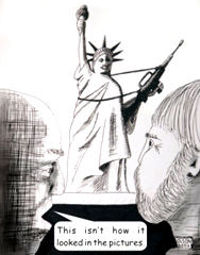