This opossum has been a regular visitor in my neighborhood for the last couple of years. Every time I see him I run inside and get my camera and he tries to run away. As it happens, I'm often faster, and I force him into a mini photoshoot before allowing him to slink off into the night.

Note... I received an email pointing out that an opossum is not a rodent... which I am well aware of--this page has rodent in the keywords because many people search for rodents when searching for opossums. An opossum is a marsupial. I mislabeled a photo as "rodent" instead of "marsupial". Thanks to Dale Max Cannon for pointing out the error.

I also want to deal with a common criticism that I have recieved about this page--that opossums are not aggressive. While they are generally benign creatures, I do think that it would be a bad idea to grab a wild opossum, since they are wild animals with sharp teeth. A cornered opossum may feel threatened and defend itself with its teeth. Of course, they sometimes "play dead" when threatened too.

Geico has been running the commercial with the Opossum. These critters are so homely... they're kinda cute. I wonder... how are they for pets?

This is the opossum knocking on my neighbor Bobs door. The fellow was lucky Bob was not home--Bob often mentions how well my pet rabbit would go in a stew, and I doubt he would fret over eating this marsupial.

The opossum trying to sneak past my camera. 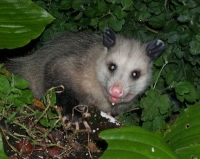 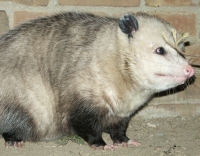 This shot of the opossum is in Autumn. As you can see... he's fattened up quite a bit. 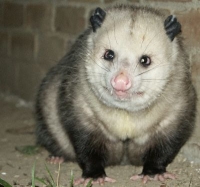 Too fat to run away, the opossum takes the photoshoot with a bit of annoyed patience. 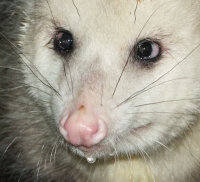 Now either opossums slobber a lot (since this guy always slobbers) or he was preparing to lunge at me.