No one has ever denied the fact that playing is fun. It must be more than fun if our schools pay large amounts of our tax dollars on sports programs designed to cultivate competitive excellence in games.

Suppose that you were excluded from those sports. You might sit on the sidelines of sporting events with a forlorn feeling of unfulfilled potential. For generations, women were excluded from sports. Blacks too. But their plight was on a social level, one that could be righted if just the right mentalities were cultured. Legislation and policy long ago swung open the door of opportunity for groups classified by race and sex.

Suppose now that your exclusion from sports was more fundamental—namely that you cannot play because there are no sports to play. One of the great opportunities for testing self-determination and growth would be missing from your life. Sadly, such is the case for some young people because of an unkind swing of fate that has left them mentally of physically challenged in such a way that were the whole world wholeheartedly welcoming them, they could still only spectate.

For some, this is their fate. And while none of us wants to bear that truth, we cannot ignore it and remain altogether human. You must always ask yourself what you would do were your functions cut short? To answer this question, you must look to these challenged people to realistically gauge a proper response.

Fortunately, not all challenged youths are left without opportunity.

Rolling onto the court instead of walking, the kids express less a sense of focused desire for battle than is common among regular basketball teams. There’s still that competitive gleam in some of the eyes, but in many there’s more a sparkle of playfulness. You can tell from the moment that the ball is tipped off that these kids are excited about the opportunity to play.

To speed down the court—whether pushed by their own arms or powered by a motor—the sheer joy of active participation is overwhelming. No one leaves the ground for a dunk since the basket is only three feet off the ground, but hearts are soaring. These players may be limited in some sense, but they have their own NBA—No Boundaries Allowed.

You won’t likely be amazed at the game itself when you watch these kids play. It’s the personalities that will get you. A foul is called, but there are no foul responses. The players only smile. 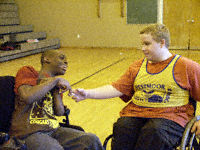 Beechcroft beat Westmoor 45-44 that day. Westmoor wanted to win, especially at home, but no hard feeling lingered. After the game, Westmoor’s Eric Grice and Beechcroft’s Alan Russell, star players from both teams, eagerly approached the other pay congratulations to a game well played.

Russell said, "We played a hard game.” He said that his team made a point to not underestimate Westmoor. He said that was key in winning. He didn’t mention the fact that his last shot of the game in overtime is what clinched his team’s victory.

The co-ed wheelchair basketball seems to transcend a lot of barriers. You can’t help but love these kids.

Leah Paul, from Beechcroft, played the whole game with a smirk. "It was very nerve-racking,” she laughed. "My heart is still pounding.” She said the ups and downs of the game—thinking they’d win, afraid of losing after all, then winning in overtime—really worked her up.

Joey Gill, also from Beechcroft, said he was happy to win. "They gave us a run for our money.”

Bruce McKinney, a westsider who referees the games, said this is good for the kids. "I see so much. Their self-esteem comes rolling out.”

He mentioned shy kids that almost seem disconsolate that suddenly blossom out of their shell because of the opportunities a program like this affords.

Paul said, "It makes me feel good that I’m doing something.” Gill said it takes his mind off of other less positive thoughts.

McKinney said that part of the success of the program is that it gives these youngsters a chance to express themselves in a co-operative group function in a manner that is often denied to them.

McKinney said, "They want you to look at their person, not their disability.” 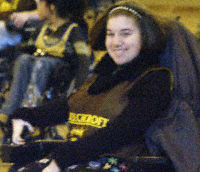 No one wants to lose full capacity of his or her human body and mind. But many of these so-called disabled kids are much more alive than the rest of us, because they take the most pleasure out of activities that many of us ignore or take for granted. Certainly, their smiles are among the most pure of anyone.

McKinney said, "These kids are champions.” 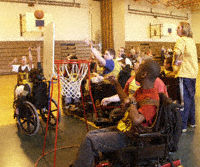 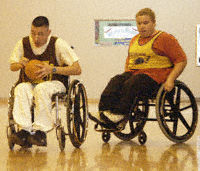 Joey Gill races down the court with Eric Grice in close pursuit. 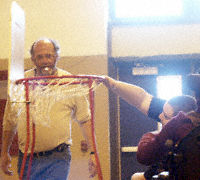 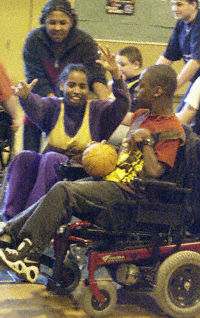 Allan Russell tries to get by a defender.

Allan Russell tries to take the ball from Eric Grice.