This last year has been a bit of a transition for our family. It's hard to believe that we have circled the Sun once since we lost my Dad last March. That's how my Dad used to talk about aging. He'd say that he'd orbited the Sun seventy times, or ask you how many orbits you are. He loved the study of calendars, chronology and time.

I remember how my Dad would “trap” my friends in his office to talk about his calendars. I knew how to escape—but most of my friends were always too polite to pull deceptive tricks like saying they had to go to the bathroom and give him the slip. I know Jeremy Martin and Chris Webb both had instances where I marooned them with Dad for hours at a time. Chris came to call Dad's office the Armageddon Room.

The calendars were a source of conflict between Dad and me. Mainly because for him they were a window into God's plan. I am an atheist, so for me there was little more to them cosmically than the expected patterns of planets cycling in a physical system. It caused my Dad great distress that I did not share his faith, and he tried so hard to get me to feel the same way as him.

My Dad felt very strongly that God wanted us to follow his schedule for worship. This played a part in why he so avidly studied calendars. He always wanted to know the time of sunsets because it was the Hebraic division from one day and the next, which is important if you have rigid lists of do's and don'ts on Sabbath and Holy Days. He was angry that the modern day changed at midnight rather than sunset. And he was equally upset that the year changed in the Winter. For Dad, the obvious change was on the Spring Equinox.

I remember a discussion my Dad and I had where he was passionately explaining to me why the year has to change on the Spring Equinox. It was such an important thing to him. But his rationale was flawed, in my opinion, and I said, “Well, I don't see anything especially important about it. Remember there are two Spring Equinoxes every year. One for the northern hemisphere, and one for the southern hemisphere.” Should there be two overlapping years going on in the world?

I could tell he hadn't really thought of that in the context of his discussion, and he seemed disturbed. Later he came to me and said that the northern hemisphere is the correct hemisphere because that is where Jerusalem is located. I felt it was arbitrary, but left it at that. I rather tried to steer our talks to more creative things and our shared love of creativity and nature. But Dad always found a way to weave the talks back to religion.

The point is that no matter how much I did not enjoy the religious talks (as Dad really was pretty pushy at times), I would endure it all over again just to spend time with him. I love him warmly, and I miss the old man. 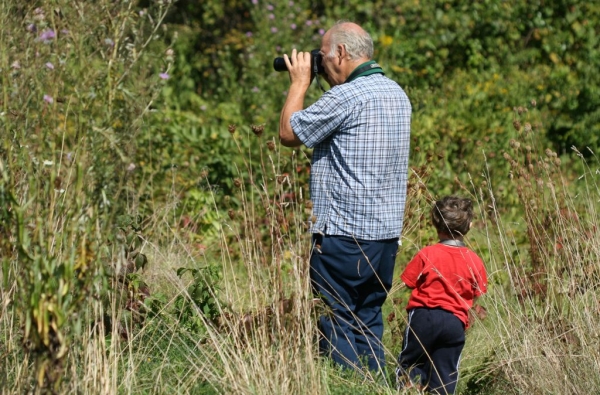 Dad wasn't the only loss last year. We lost our longtime companion Dewey. He was just ten years old. He had started to lose some weight in the weeks preceding his death. A week before he died, I had to force him to go for a walk, instead of his usual dragging me out the door. His muzzle was getting gray.

My last morning with him he was sitting in the bathroom when I woke. He lifted his eyebrows and wagged his tail when I walked in. But he didn't want to get up. I pet him and stood to get our daughter ready for school. Dewey gave a longing moan, the kind I've never heard before. He sounded sad and lonely. I leaned down and petted him some more, and when I stood he did it again. I said to him, “I'll be right back.”

So I walked out and did the morning chores of waking children and starting a pot of coffee. Then I came back into the bathroom. Dewey had died.

I've always loved animals, but for me the love is generally abstract. I love their beauty and raw connection to an uncontrolled system called nature. I love to think about how animals must experience the world, and what it might be like to be an animal that uses emotion and instinct and illiterate logic to make decisions. And although I've had several pets in life, and once worked at a pet store, I never had any deep emotional connection with any animal. Until Dewey.

We chose a golden retriever a decade ago because it is such a beautiful dog. My Mom always told me that she had always wanted a golden. I personally had a goal of buying my Mom a small farm and golden retriever, but she died before that could ever happen. So Dewey was, in part, a connection with my mother. 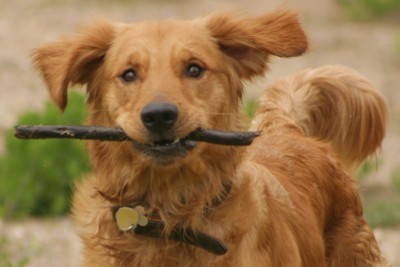 Dewey and I used to take walks out in a field not far from where I grew up. He got to grow up in large part running through the same fields, swamps and trees that I had loved so much. I have some wonderful pictures of young Dewey romping through the vernal pools with such abandoned glee that it still makes me smile.

When we got our house and a large yard, Dewey loved to chase squirrels to the walnut trees. We loved to take walks down the train tracks.

A huge percentage of my time writing code and working entailed Dewey sleeping at my feet or side. He was always there.

Now it is so weird to take walks alone. That's how I grew up... spending a lot of time walking and thinking. Sometimes that is good. But now I think you shouldn't do that all too much, always alone. It's always good to walk with good companions and enjoy the world together. I think that for the rest of my life when I walk and there is a breeze or colorful sunset, I will see Dewey's face sniffing in the wind with his golden fur, content to be alive.

Many other things happened this last year. Jenny finally made an honest man out of me and we got married in August. (I have to put it like that just to tease her.) She's a beautiful woman, and we've managed to get through many hard times together. She stood graciously by my side when we took in Dad and had to deal with some things that would probably tear many people apart. She has given me a handsome son. Like all couples, we have our conflicts (I'm too arrogant and she is too worrisome) but it all evens out, and I look forward to more decades of telling her to stop worrying and just smile.

In other news, I have finally started to make regular income on 3D. 3D has been a passion of mine for around a decade and a half, and although I've gotten hired for jobs here and there, it hasn't been until this last year that it became more consistent.

One break came when legendary level designer Robert Briscoe hired me. I was honored and blessed for this opportunity. Honored, because he is such an esteemed artist that is known by the entire world of game designers. Blessed because Rob literally hired me to simply add some features to my own tools called Wall Worm. He's now hired me for several different projects. I couldn't really share the why's of those jobs, but now Rob wrote about it in his blog on how he is experimenting with porting the game Dear Esther to the Unity game engine.

Rob's support and comments have been a great validation to the work I've been doing. I started building Wall Worm back in 2010. Since then Wall Worm has become a standard in many game designers' pipelines. But the tools I've released have always been free, and have not even paid for my annual subscription to software licenses. My goal has always to use the tools to usher myself into the game design industry. But that hasn't been as easy as I once expected. Thousands of people and several prominent designers have used my tools to do things previously impractical or to save large amounts of time, but donations have always been slim.

After Rob hired me I started thinking about taking a different approach than getting hired into the game industry directly. That's still a possibility on the table, but instead I've started to develop some commercial plugins for 3ds Max. So far I've released two plugins: CorVex and Detailer. CorVex has gotten a lot of good results, and I hope to see it continue to grow.

Finally, I want to share some randomness with you from my circle of friends.

My friend Chris Webb (who above called my Dad's office the Armageddon Room) has recently launched a new website called the Chattanooga Cheapster. This is weird for me, since I always have thought of Chris as being a high-roller. When we were young, he was always the guy with money, cars and new clothes. (Hell, my current winter coat is a hand-me-down that Chris gave me a few years ago.)

I guess that married life and a family changes things.

I also wanted to share a fun post involving Andrew Penry and Jeremy Martin. Andrew and Jeremy haven't crossed paths much, but I'm bringing them together here for your pleasure: Infinity, for the Mind and Body. They are two of the smartest people I know. 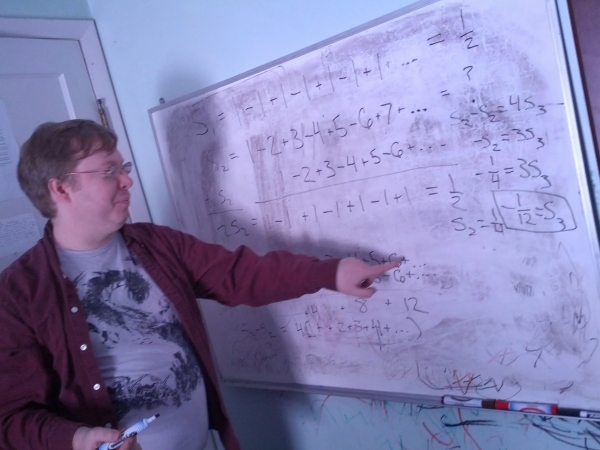 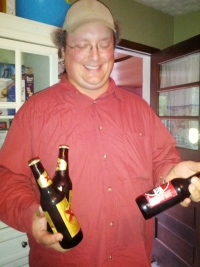 Jeremy is a hermit and only comes out when I badger him. But Andrew is your more outgoing introvert. In fact, Andrew recently launched a new tool called Simple Goal that may be of some use to you.

Wow. It is hard to believe that your father has been gone a year. It doesn't seem possible to me. I do miss him greatly. Realizing how much I miss him and how much of him I have missed has brought upon a stark realization of all I have squandered. There is so much I could have learned from him, so much more I could know. But, alas... the time for it is gone. Sadly.

I am glad that the Briscoe job ahs dome so much for you and for Wall Worm. I hope more and more work finds its way to you. You deserve it. Though I am annoyed by your atheism and I grit my teeth at your liberalism, you a great guy. Another older brother and an inspirational friend. You have added so much to the lives around you. I am glad to be part of it and am honored to have another year to bother you.

2013 is past and before us we have this new year underway and many software upgrades. It will be a good year I suspect, If for nothing else than wishful optimism.

Well I'm glad you're my friend too :)

PS. You're assumption is incorrect. I know very few atheists. But I'd guess that we each feel very blessed. Blessed to have life, opportunity, family, friends and love. You don't have to believe in God to feel blessed. 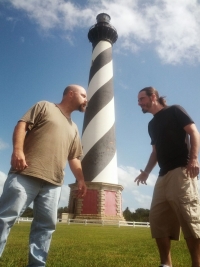 My brother-in-law and I were trying out for a role in the upcoming Lighthouse Mortal Kombat Movie.

I tried out this year to be a pirate. I was turned down for this role.