You pick up a daily paper on any normal day and you read about the crime and violence on the streets; you read about youngsters gone awry in gangs and drugs. Too rarely do you see the finer efforts in the community.

That’s what Keith Neal feels. He’s the assistant director at the J. Ashburn Jr. Youth Center. Located at 85 Clarendon Avenue, the center is one of the highlight places for Hilltop youths to spend their time after school and during summer.

JAJYC turns forty this year. And it’s celebrating with its new facility that opened last October, just a block east of its old location.

The center started in 1962 as an outreach program for the Oakley Baptist Church, headed by the late Reverend Jacob Julian Ashburn. He named the center after his father, Rev. Jacob Ashburn Jr.

Ashburn Jr. had been a state legislator who was known for his habit of visiting the sick and elderly in the community. He died before his son opened the J. Ashburn Jr. Youth Center at the church.

After taking over his father’s church and starting the youth organization, Jacob Ashburn incorporated in 1971. By 1972 he turned the place to a professional organization. That’s when Jaymes O. Saunders came into the picture.

She’d lived in the community and knew the Ashburns. She happened to meet Jacob Ashburn in a grocery store in the early 1970s. Ashburn told Saunders he was getting incorporated, and he wanted some help. Saunders gave Ashburn some advice, but she had no intent on working at the center at the time. She already had a job as a social worker.

"I came just as temporary help,” said Saunders. But when she started to get a closer touch on the people involved and the kids being served, she started to feel differently.

"From that point,” said Saunders, "things started to grow. I saw the need in the community.”

She has been at the center ever since. In 1984, after Ashburn died, Saunders assumed the role of executive director.

The focus of the center has always been on character development, said Saunders. All the activities at the center have character and discipline surrounding them. Saunders says that mission of instilling good character may be more important now than when the JAJYC opened.

The Hilltop has changed, she said. "Early on it was a rather quiet community.” Saunders said that people didn’t worry about locking their doors. "You didn’t have to worry about it.”

Saunders said that the community had a much more village atmosphere in terms of raising kids. "You didn’t hesitate if you saw a kid doing something inappropriate to deal with the kid. They were respectful, and the parents appreciated it.”

She contrasted that with today’s kids whom adults don’t reprimand unless the children are their own.

Saunders said that a major difference in the community is that there are less homeowners now than in the past. This and the fleeing of storeowners from the Hilltop have contributed to the deterioration of the neighborhood since the owners of property have lost their special interest in the area. Those who live in the area tend to be more transient, coming and going, leaving the area somewhat bereft of deep roots and ties.

Keith Neal echoes this point. Aside from being the assistant director, Neal runs the Great Expectations program at the center, devoted to conditioning, discipline and basketball. Neal is also the assistant basketball coach at West High School.

Neal started working at the JAJYC twenty-five years ago as a janitor. "It was a calling. I was called to this job.” He said that Ashburn had felt he was overqualified to be a janitor, which is probably why he is now assistant director.

Neal said that dealing with the transient population has forced the staff at the JAJYC to learn to deal with different cultures and groups that aren’t necessarily stable. Lack of stability in the area, a sign of economic struggle, makes the work at the center that much harder.

As an indication of the economic hardships in the community, Neal said the boarded-up homes are a sure sign.

Neal said, "If you don’t have a stable economic base in your neighborhood, you’re going to have problems that manifest themselves.”

One of those problems is poor parenting. Struggling parents and single parents spend less time educating and nurturing their children than they would under better circumstances. Neal said he’s seen too many grandparents raising grandkids because parents are trying to bring in income all the time.

Neal said that this has created generations of people who don’t know how to parent, which create a perpetual cycle of people devoid of parenting skills.

Aside from racial, cultural and economic struggles, Neal stresses the horror of drugs. Speaking of crack cocaine, Neal said, "It’s just destroyed an entire generation right before my eyes.”

He said that in 1978 there were always at least forty guys waiting to get into the JAJYC gym to play basketball. By 1984 there were often less than a dozen waiting for the doors to open, since the rest were off trying to buy or sell the illegal narcotic.

Drugs are still a problem.

Fighting that problem, among others, is the whole purpose of the JAJYC. "I know it’s working,” said Neal. For every failure—since there are still those who end up on the wrong side of the tracks—there are 4-5 successes. The opportunity to get kids off the street and lead them to productive activities gives many local youths a chance to find guidance they could easily be lacking.

The activities offered at the J. Ashburn Jr. Youth Center vary from homework assistance to internet education; from reading instruction to games and activities; from girlfriend’s club to soccer and basketball. There’s more, too much to list.

"We want to stress more the importance of education,” said Neal. He points to the success of past pupils such as West High Alumnus and NBA star Michael Redd, among others, for whom academics were always a high priority.

Academics, setting high standards and being a role model are the drive behind the staff at the JAJYC.

The JAJYC is available to children 5-12 years old, although teenagers are encouraged to come and help lead younger kids. Membership is $5. The center will soon offer adult internet education as well.

For more information on the J. Ashburn Jr. Youth Center, call 614-279-0012. Saunders said that it’s all about community involvement. She said there are signs that the community is restoring itself, finding roots. Referring to the future, Saunders said, "It should be good.” 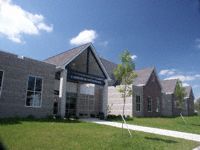 The new facility housing the J. Ashburn Jr. Center was partially opened to the public in October 2001. Not until January of 2002 did the facility open on a full scale. Before this building opened, the center went on a two year span of limbo where the activities were run from nearby schools and administered out of a nearby home. Funding has come from many sources, including the United Way, the Columbus Foundation, the Nationwide Fund, and various other local organizations. The state provided $1 million to the center's development. Executive directoer Jaymes Saunders expressed her pleasure to have the center open again."Kids have a place to come. That makes a big difference in the community.

Peggy Gouch (social services director), Keith Neal (assistant direcotr) and Jaymes O. Saunders (executive director) are but a few members of the dedicated staff at the J. Ashburn Jr. Youth Center that provide developmental activities and guidance to local youths. The JAJYC currently services around 400 children, but the facility has room for more.

Ronnie Jones (right) is a group activity leader at the J. Ashburn Jr. Youth Center. Above she supervises students after school while they do their homework.

Kids learning to use computers. 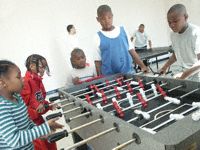 Using the game room after school, these youngsters got a chance to let go some energy playing some table hockey. When a couple started arguing loudly, a nearby staff member arbuptly reprimanded the children to show more respect if they wanted to continue with their fun. The kids quickly went back to theri play, intent on staying out of trouble. From left to right, clockwise, these children are Doniqua Watson, Lucy Eanes, Dashon Redman, Joshua Hicks, Jeremiah Hicks, and Terrick Cooper.

Chad Milin and Milim Pinero take advantage of the pool table to polish their billiards skills. 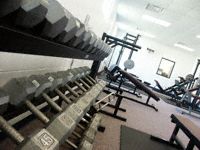 Keith Neal, the assistant director at the J. Ashburn Jr. Youth Center, heads the Great Expectations basketball and conditioning program at the center. Above, he watches youngsters as they sprint across the basketball bourt.