The Black Curse has been evolving for nearly two decades. I first designed it as a board game in the fourth grade. At the time it was called The Doctor Who Game because I was such an avid fan of that British Sci-Fi show. The first draft was designed on paper that I graphed with pencil and ruler and mapped out meticulously; it ended up becoming a game of around forty boards that I mapped onto poster board in ink and colored pencils, and then laminated so that items could be marked off with temporary markers.

At the time it didn't seem like that big of a deal to create the game… but I remember that adults often marveled that I created it at such a young age (though, undoubtedly, many also thought it strange). Now, after I've spent time in schools as a photojournalist and a parent raising children, it boggles my mind that I did create it so young. Had I designed it twenty years previously, it might have been marketable—alas, that potential was destroyed with the advent of the video game era. It was, actually, created as an alternative to video games—my friends were then getting the original Nintendo system, and it was envy of the video games they had that drove me to create my own "action adventure board game".

By the time I was a teenager, The Black Curse spent a lot of time collecting dust in my closet. Every now and then I took it out to show friends or to modify this or that rule. The game did change over time, but overall it remained very similar to the original design.

In early 2004 I started thinking about reviving The Black Curse from its shadowy place under my desk. I started conceiving the idea of making The Black Curse into an online board game. So I started turning the rules into code using JavaScript. At first I was a little dubious as to how successful I'd be, since JavaScript isn't necessarily the most advanced programming language there is—but since it was one I was familiar with due to my work as a web developer, I tackled the design with at least a little expectation of success. Within a day I realized that JavaScript would work just fine, and in the matter of two days I had nearly finished all the programming.

Currently, The Black Curse can only be played in Internet Explorer... and I've only tested it in IE 6. 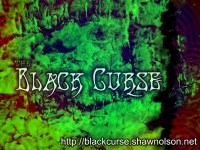 Promo graphic for my JavaScript-driven online version of The Black Curse, a board game I designed as a kid.