How I Broke Three Trucks

Fresh out of high school I started working for a boiler repair shop as a welding assistant. The title didn't really fit my role, since my usual occupation was sweeping floors that collected dirt faster than several physical constants of the universe should have allowed; the time it took Houston to sweep Orlando in the 1995 NBA Championship wouldn't have been fast enough to keep the dirt off this shop's floor.

On occasion my bosses (everyone there was a boss, I think) would break the cycle of fighting the hordes of dust by sending me on an errand to pick up pipes or drive a forklift. But somehow I always seemed to disappoint my employers.

I really wasn't smart enough for the job, to tell the truth. Like the time I was daydreaming about some far away place where dust was merely a boogieman conjured by parents to keep kids intent on cleaning their rooms. I was so deep into this little dream that I jumped when someone behind me said, "Hey Shawn." Scrambling to regain my composure and snap back to reality, I accidentally stirred up some dirty wisps of dust from the floor.

"We're working on something important here… go over there and get that one tool off the table."

I looked over there to the many tables hiding in the shadows of the far corner of the shop. Tools covered all those tables.

After staring at me for a moment (with that look that toyed with being annoyed and sympathetic), my boss said, "You'll see it, it's the one we need."

Well normally I would drop my broom in an instant, but I clutched it like a toddler holding a teddy bear in the dark as I crept into the gloom. There were piles and piles of misshapen metallic creations scattered everywhere… along with tools that could easily have passed as devices of torture from Medieval Spain.

After a few trips back and forth, I learned that the tool they sought was not a hammer, pliers, clamp or even a level. I came to dread the order of "Go get me that tool."

I did finally get to go out on a job. My boss took me out to a large plant with six boilers. Three were down for repairs. We pulled up and parked the welding truck near the entrance to the boiler room, and I carried a bucket full of (more) obscure tools into the room.

Well, you see, boilers make noise. And three of sox boilers in a relatively small boiler room make a lot of noise. And earplugs block out noise. And facemasks muffle voices.

Frantically, I looked in the bucket of exotic tools. I pulled one out and he shook his head. Another tool…no. The next was not it either. Aggravated, he reached down and got the tool he needed and told me its name (MFMFMFFM).

Eventually he had cut out nearly all the bad pipes in this boiler. When it was almost time to put in new ones, he handed me the keys to the truck and told me to go around to the storage shed and get the pipes.

It was my first time driving one of their heavy welding trucks. And it was the first time a messed up while driving one—and not the last. As I was pulling up to the storage shed, I noticed something dangling from the side of the truck like dancing worm on a hook. It was the hose from the acetylene torch… the same hose that had connected to the torch my boss had been using to cut pipes back at the boiler room.

After shutting off the valve, I paused for a good thirty seconds, wondering if I ought to just leave now. I sucked it up, got the pipes, and drove back to find my boss waiting outside with his hands on his hips.

The second time I broke something on their trucks wasn't really my fault, I promise! Dozens and dozens of water-bottle racks we'd built were stored in the parking bay, so tightly packed against the truck that there was no way to get it out. But I was under strict orders to get it out, despite my protests about the narrowness of the passage.

The passenger-side mirror was wedged in between all the racks. I tried to maneuver the machine two inches forward and turn, an inch back and turn, etc. But something bad happened when my foot hit the gas a little more strongly than I intended. Along with the sudden surge of engine noise came a loud screech and snapping noise.

When my boss came running into the room, he no more than looked at the mirror dangling from the side and expressed his selection of choice expletives.

The good news was that it wasn't hard to drive the truck out now.

The third truck was a nightmare. It was huge. And it had a manual transmission. I didn't know how to drive a stick, and I told my boss this. But he insisted. "It's no big deal. I just want you to bring it inside."

Well I fired up the diesel monstrosity born back in another decade and tried vainly to will it forward. After ten minutes of getting the engine to make a lot of noise without it going anywhere, my boss came out to watch my progress. Beads of sweat formed across my forehead when finally I got the behemoth to lurch forward. Wow… it was moving! I was directing it towards the bay and my boss actually seemed to enjoy a moment of pride—he must've felt like he had finally made a break-through in my education.

But his smile immediately snapped off when the turn signal on the other side of the truck snapped off into the fence. I guess I cut that corner too close.

I was back to sweeping floors.

But the whole experience of working in the boiler shop wasn't a waste of time. I learned to respect all the skills involved in the trade. And I learned that I'm not cut out for that line of work. The best part of the experience, though, is that now I have something to tell my kids when they complain about picking up their rooms—until they've swept as much dirt as I have (I leave out the broken vehicles when talking to them) then you have nothing to complain about.

Humorous accounts of my work history as a jack-of-all-trades. 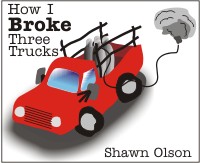 A tale about how I broke three trucks when working as a boiler repair assistant (floor dust manager).