Regarding the recent ESPN/Rush Limbaugh controversy, I can only shake my head. Anyone moderately familiar with Limbaugh's show or writing cannot be either shocked or surprised by Limbaugh's comments over the media's desire to glorify a black quarterback (Donovan McNabb ) in the NFL. It seems rather cliché coming from Limbaugh.

The real surprise is that ESPN management was myopic enough to hire Limbaugh to begin with. How could they think that a long-time political propagandist who has hosted his own TV and radio show—who happens to be an excitably opinionated person—would suddenly lose his habits of being a political propagandist? You almost can't blame Limbaugh, who might as well have been a child in the candy store with a fresh five dollar bill.

Now Limbaugh was almost right in his follow-up remarks that there are occasions where the First Amendment doesn't seem to hold sway, and that personal opinions are nearly taboo… Well almost. Limbaugh did get to say his peace, and there wasn't too much harm done. What Limbaugh doesn’t get is that an NFL broadcast is not Larry King Live and everyone involved, from players and producers and sponsors to viewers and fans, wants to see and hear football, not social science.

My question is how did Limbaugh become an expert on football to begin with? Limbaugh already proved himself a poor source of expertise on science a few years back. Maybe it's time to keep Limbaugh to the political airbag corner? 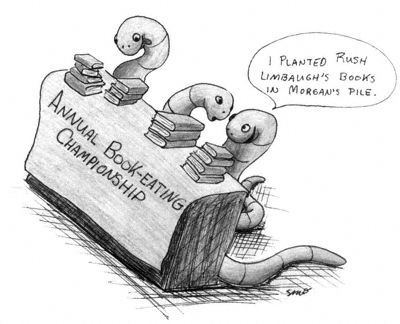 Semi-facetious discussions on inconsistencies or deficiencies in on modern American life.