Normally the United Skates of America on Refugee Road hosts families and children from nice neighborhoods to skate peacefully in an area designated for that purpose. But for the last two Sundays, a different crowd has congregated there for an entirely different purpose.

The International Wrestling Alliance has hijacked the facility to play to a live crowd of unruly spectators and mischievous children ready to boo and his and cheer. IWA Carnage has come to life in Columbus.

The wrestlers of IWA hail from The Dungeon, aka the IWA school in Grandview. Such heros and villains as the Holy Man, Rok Wyler, Dangerous Damien Kass and Shigroth, among many others, duke it out in a ring for wrestling fans of all ages.

Produced by Wild Bull Miller (Tom Miller) the IWA shows are shown on HBO channel 15 on Sundays at noon.

While most of the spectators at the two shows so far have been friends and family of the wrestlers, the IWA is seeking a wider audience. Miller said he hopes that the show will draw in larger crowds.

The show is worth your while if you’re into wrestling. With the WWF coming to town 2-3 times per year, the IWA Carnage series gives a fresh opportunity for wrestling fans to get their fix of over-dramatized arena theatrics.

Miller said, "We put on a show every bit as good as they [WWF] do—minus the pyrotechnics.”

Ted Blain, from the northside, said he’s been a wrestling fan for forty years. "It’s a lot of fun,” he said. "They’re about as good as the big-time wrestlers are.”

Alice Thacker, a relation to one of the IWA wrestlers, said, "It’s very exciting to watch them. I would rather watch these guys than the WWF right now. These guys are just getting started, so they’re all excited about it.”

And despite all the overt violence, many of the fans are children. Thomas Richards, from Lancaster, brought his 4 and 5-year old children. He said, "It’s a good environment for the kids.”

Miller said he feels that wrestling has been more or less snubbed by the media. He notes that every basketball or other mainstream sports events get coverage on local TV and newspapers. He wonders why there is seldom coverage of the WWF when it comes to Columbus and draws thousands of spectators.

According to Miller, professional wrestling has a 3-1 edge of fans over football. He cites Monday Night WWF Raw as the biggest show on cable, more watched than Monday Night Football.

So he’s a little sore on the issue, especially as he tries to promote his business.

When questioned about the skills needed to be a professional wrestler, Miller said, "No matter how good of an athlete you are—if you can’t get over stage fright or act like an idiot in front of hundreds of people—you probably won’t do well as a pro.”

Miller added, "We’ve got some great athletes at this level, but it’s developing the personality that counts.”

While no pro-wrestler on any level is likely to win an Oscar anytime soon, the wrestlers obviously revel in the acting. Training the wrestlers to act is as important to the success of the show as teaching them to fall correctly.

Character development figures into the formula, learning to feed off the interest of the crowd. A boring character won’t last long in this business. Playing to the crowd is key.

Miller said, "Any idiot can pull hair, but it’s knowing the right moment when to pull hair that counts.”

With more than 50 wresters at the IWA school to pull from, there’s a deep well of possibility for what Miller calls the "male soap opera.” He said, "Every match has its own story.” There are a lot of characters to get to know.

So you might want to check out the IWA Carnage if you’re into eccentric men in bizarre costumes duking it out in a ring. It’s certainly a peculiar use of a skating rink. 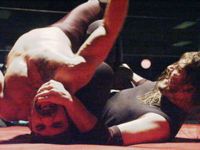 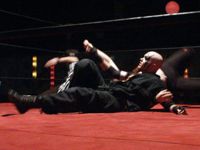 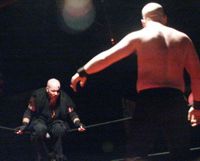 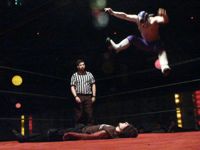 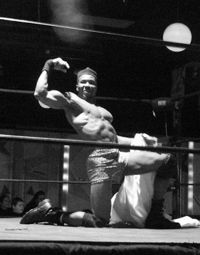 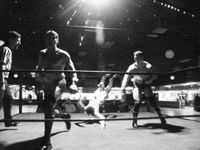