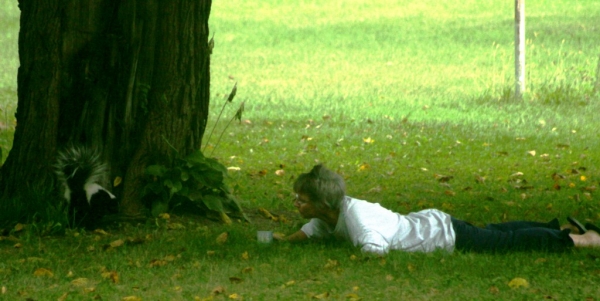 Everyone has a crazy neighbor story. But only a couple people in the world actually live next door to Dana. So I'm pretty sure that my story is not like many others.

When we first moved in here I was out back and a skinny middle-aged gal approached me from the other side of the fence. She had a big smile that matched her friendly demeanor. When she reached my gate, she said in a part serious, part flippant tone that you can only recognize once you've met Dana.

I smiled, shook her hand and took her at face value.

As the years have passed I'm sure that Dana actually is a little bit crazy. Not exactly in a way that demands institutionalization, but in the way that pretty much all of us are as we try to fit ourselves into the social arena of our lives. She just happens to wear the craziness a little closer to the surface than most of us. At home I might snicker and say that's expected of women, but then I'd get smacked and pinched by my wife. So just say Dana is crazy in a normal kind of way.

Dana and her husband Don have become great friends of our family, so Jenny and I have gotten to know them pretty well. And one thing I've noticed is that Dana (like my wife) has a problem with not falling in love with every furry critter that wanders into the yard. It's why both households generally have more cats than the husbands really want.

But this isn't a cat story, actually. It's a polecat story. And here is where it starts.

I was at my computer laboriously typing a bunch of code when I heard my alarm go off to remind me to stretch, get some coffee and take a break from the monitor. When I stood, I looked out my window and saw Dana staring down a skunk. In our part of the woods a skunk is often referred to as a polecat. I've seen several skunks in my life, but always in passing--like the skunk wanders into view as it searches for moles, frogs, berries and other goodies. Generally when I've seen a skunk, I've been excited to see it and also quick to get the hell out of there.

Nope, Dana wasn't getting out of there. In fact, she was staring the critter down with such a fixation that I was actually starting to re-think that non-institutionalizing thing. I'm pretty sure I was grimacing with the anticipation of a gruesome outcome as I saw Dana lean forward and the skunk raised it's tail stiffly and flattened it's body some. Yep, this was going to be bad.

So I ran for my camera and snapped some shots. Although mortified with what was going on, I was also morbidly fascinated--anticipating something good for the shutterbug in me.

For the next several minutes I shot Dana pressing her luck with the skunk. It would start wanderign away, sniffing and scouring--and Dana would flank him and cut off his path. The skunk would stop and kind of stomp on the ground. When Dana stopped pressing, he would wander around, hugging the base of the tree for nuts or grubs. But then Dana would get a little closer--and now the skunk whipped himself around to point his skanky bladder-cannon right at her.

Now I knew it was going to happen. So I switched to Sports-mode on my camera.

But the skunk didn't fire his weapon.

Dana laid down next to the skunk. It dropped it's tail and went back to foraging.

I wondered if I should open my window and remind her how insane it is to pester a skunk. But the journalist in me refused to give up my journalistic duties, and I raised my camera up again.

So this went on and on and eventually I actually got my coffee. When I came back to the window, it was pretty much the same stalemate. So I decided to cave into my civic duty and open then window to offer some much-needed advice. But before I could, Dana walked right up to the skunk and bent down.

"No!" I yelled (with the window still closed and my dog sitting up abruptly). I was half smiling, but probably more of the look a chimpanzee gives when it's really nervous.

She bent down and grabbed the skunk. And I watched, with my mouth open in shock (but still photographing), as she hugged it close and took it to her garage. 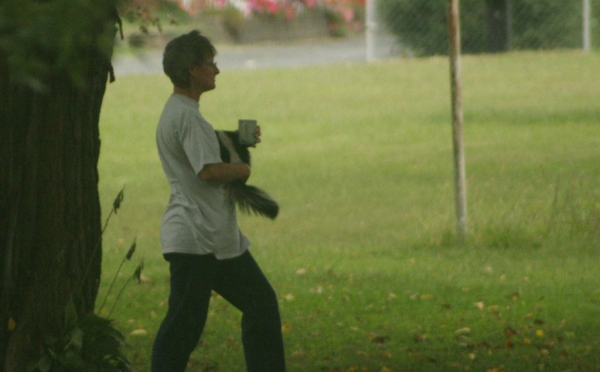 I'm not often confused by the behavior of other humans, and this was no exception. I knew she was hiding it in the garage from her husband. I knew that had to be what's going on.

So I picked up my phone and called her with a devious smirk (and a little self-righteousness).

"What?" she asked innocently (too innocently, to be honest), not understanding the question.

"The skunk. The one you just took into your garage?"

I kept my secret for a while... you know, about taking all those photos. Who wants the neighbors to think you're a crazy person butting into everyone's business? 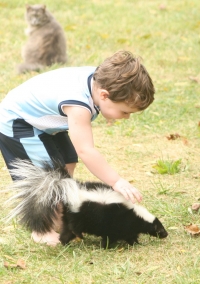 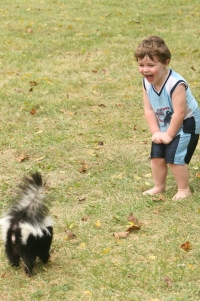 So she brought him over and the kids played with him. It was actually a lot more playful than I'd expect a skunk to be. 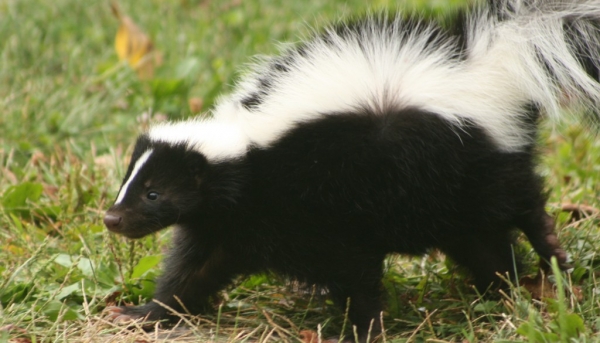