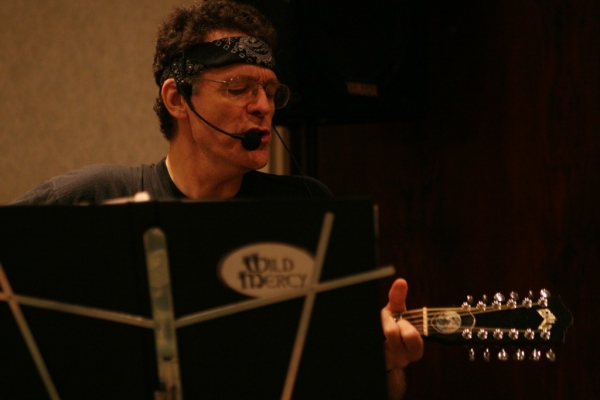 I first met Barry Childs-Helton many years ago as I sat in on a poetry panel at a fiction convention. The panel included several writers and academics. I remember very little of that session leading up to my first exposure of Barry. Most of the other panelists were sharing ideas and opinions with each other and the audience. All of the banter didn't even make it to my consciousness as my mind wandered some--honestly, I was a little bored. I was mainly there to show support of the only panelist I knew: friend John Dalmas.

No one seemed to notice the gorilla in the room. Well, not until he first spoke. Barry is no gorilla, but he is tall with dark curly hair, a reminder of both Tom Baker and Jerry West. No, it was his voice. His voice was so deep and resounding, exotically comfortable, like an oversized blanket with layers of down from some long extinct, feathered beast.

Had he been sitting there all along?

My mind had stopped wandering and I was transfixed. Where did this guy come from? He was talking about something, but it wasn't just the words themselves that mesmerized the audience; not dictations... they were eddies of poetry washing over everyone in the form of instant chills. Every hair on my body awoke, stretching to life, insisting on saluting this bellowing sage. Words had never put such a spell over me. And when he stopped, there was a pause in the entire room as everyone tried to figure out what they had just experienced.

Professors and writers and witnesses shook themselves out of the moment. One professor openly gasped and started rummaging through her papers. She pulled out a poem a student had just written, I believe, passing it down to Barry. She asked him to recite it. With a friendly smile and brief glance at the paper, Barry entoned another entrancing incantation onto the room. That he collected it in his memory with such a brief glance was not as wondrous as his profound recital. 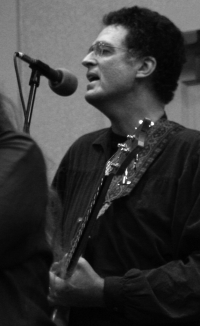 He is one of those people who doesn't really belong here in this age. You are only supposed to read about great poets. The age of texting and Internet and glossy media had banished the messy art of real-life, impromptu, natural and intimate. Right?

I have never been someone to be star-struck or be fanatical about other humans. Certainly I enjoy the company, friendship, talents and quirks of my fellow humans. But people are people, and rarely has anyone "out there" moved me to the desire to actually meet them. This is was an exception. I had to meet him.

After this panel I introduced myself to Barry. I expected he was a renowned poet at some university that teaches Shakespeare in the tongue of Tolkein's elves. I asked him if he had a book I could buy.

"No," he said. "But I do write lyrics for my band." He invited me to hear them that afternoon.

And that was my first introduction to filk, Wild Mercy and Barry Childs-Helton. And I've been a loving fan of all three ever since.

I've had occassion to see Barry and Wild Mercy play a couple times since then. The interludes are filled with digital proxies playing from my computer as I work. The years have passed and I've not seen any new productions. So I randomly stop in to pester Barry in emails or Facebook for some new art. He's been promising... I've been waiting.

And now, finally, there is something new. Barry just released a new solo album, The Summers Behind You. Seventeen new songs to fill up my library. Although not as varied as Wild Mercy (which features not only Barry's deep voice, poems and guitar, but also lovely female vocals, drums, keyboards and harp) this album is an intimate admonition to enjoy humanity, humility and humor. And I love it.

Thank you Barry. Keep it up!

But that doesn't mean I'm not going to keep harassing him to get the next Wild Mercy album out.