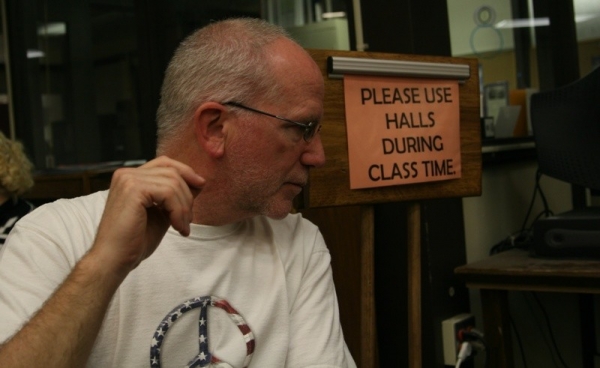 For those readers who happened to attend Westland High School, this newsletter may include some news that will start to make you feel old. Jack Buckingham, the well loved English and journalism teacher at WHS, has retired. Jack was one of my teachers; as a student, I leaned on him more than any other adult for moral support.

If you are not familiar with my school history… I was a hard case. I had decided as a teenager that I wanted to be a writer and possibly a teacher. But I hated school. Mostly, I hated the institution of school; I was passionate about education, however. For many people, it seems oxymoronic to love education but hate the formal institutions of school. Although I no longer feel all the seething hatred that boiled in my teenage blood, I still feel strongly the same basic idea—education is paramount in human lives; institutions of education are often very myopic and hypocritical.

Jack seemed to understand my feelings and sympathized. He even let me be the school’s newspaper editor. Which brings me to a little story that actually played a significant role in my life.

As the editor of the WHS newspaper, I did not perform well. I found it hard to motivate the other students to get stories in on time. I also found it hard to keep my own personal feelings out of the agenda. Almost every story in the paper was something that was guaranteed to offend, insult or enrage some segment of the school. There was very little actual journalism in that issue. What is worse, Jack had specifically told me to remove some language in one of the stories; I blatantly ignored the request and took the paper to press.

Yes, that paper made a big stir—which is something the other students and I wanted to do. After a few hours in circulation, I think it was pulled by the principal and officially banned. My personal favorite contribution to that issue was a cartoon of one of the administrators whom I drew to resemble Adolph Hitler.

As you can expect, that was my final day as the school’s newspaper editor. I think I even got suspended for the stunt. My immediate reaction was one of self-righteousness. At the time, I felt I had done the right thing. But over the coming weeks, another feeling grew. I learned that Jack had faced no small sum of heat in the school for the publication. That knowledge fostered a feeling in me… one that actually lasted for many years. Guilt.

Yes, I felt very strongly about certain things. Yes, schools were not always perfect vessels and administrators were not always shining pillars for white towers of knowledge. And yes, I proved my point that schools are more likely to censure than to promote exploration and criticism. But despite all that… in the end… I learned that self-righteousness is really not all that pretty. I had let down someone who had put a lot of confidence and trust in me. I had betrayed a friend.

Two things this story shows. For me, it was deeply educational… as it has always reminded me to tone down my own feelings and try to look at the big picture—to see all the other faces involved in my decisions. Just because every fiber in my body tells me that I am right… it doesn’t necessarily mean I should push my feelings into every decision. Sometimes feelings can lead to poor decisions and actions that hinder more than help.

What the story also shows is the kind of person Jack Buckingham is. After that publication came out, Jack did not beat the daylights out of me (I would have had I been in his shoes). Instead, he sat me down to discuss why I had disobeyed him. And even though many teachers and administrators were extremely angry, Jack protected me from them and deflected their irritation towards himself. To this day, Jack always smiles when I approach. He is a genuinely warm person.

When I learned that Jack was retiring, his colleague and friend Reggie Wagstaff invited me into the school to take some photos of Jack in action. I secretly photographed Jack as he mingled amongst students to discuss their class projects. I shot from above in a mezzanine that hovers over the school’s library. At some point I lost him below me; a few minutes later, I saw him approaching me with a video camera in hand—although he did not see me until he was a few feet away. Immediately, he started to laugh warmly.

After I wrote the article about Jack retiring, I started to think about teachers in general… and I realized there will probably be some curious letters from readers and teachers. A couple of years ago I spent time with another old teacher and wrote about my day with him. I praised Gary Sigrist for his talents and skills as a teacher. Now I am praising Jack Buckingham. But anyone who happens to know both Jack and Gary will know that they are extremely different people—and the fact that I am praising them both may seem inconsistent.

Jack is a very informal man with a streak of anti-establishment blood in his veins. Gary is a much more formal man who has a second life as a police officer. Jack is known for being very soft with students; Gary is very strict. Jack is a Democrat; Gary a Republican. The two men are so very different in so many ways, it almost does seem inconsistent to praise them both… and I wondered if my emotions were getting in the way of good judgment again. Here are two men I have looked up to in life, two men whom I would never realistically expect to find socializing closely outside school walls.

But the more I thought about it and the more I discussed it with friends, the more I came to the key of why I like both men so much. Both men share a common set of traits that makes them exceptional teachers, despite how different their classrooms and personas are. I think that what makes these two men (and all other educators who get this label) good teachers, is not so much because their classrooms have a specific style… but because they are both so passionate about what they do! Reflecting on all the teachers who made good impressions in my life, passion has become the main common thread. If they believed in and loved what they were doing, then their classrooms became meaningful and memorable.

If you love what you are doing and believe in it, you can find a way to make it meaningful to those around you. You may not get everyone to follow in your footsteps… but you can at least get them to appreciate the path you have walked.

In other news... I have been spending a lot of time in 3D Studio. I am almost done with my first commercial 3D project. Andrew Penry and I also created our first Macroscript for 3D Studio which is linked below. I'll have screen shots of some of my 3D work in the next newsletter.