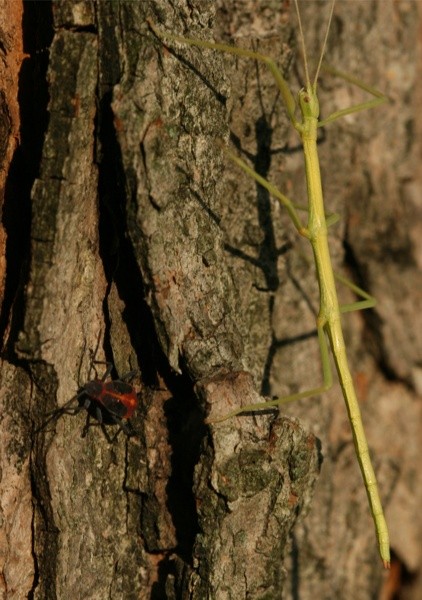 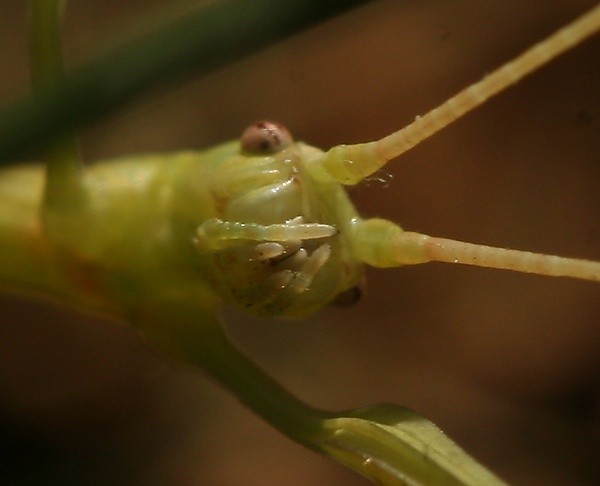 The Stick Insect (often called the Walking Stick) is a treat to find. I have personally only sited the large insect a few times in my life, which is ironic considering I have spent countless summer hours picking raspberries and blackberries—which are favorite foods of the Stick Insect. The photos and video on this page are of a stick insect Jenny found walking on a bench on a family porch in Pennsylvania. This specimen was still fairly small. I once found a much larger stick insect in Ohio, but I cannot find the photo of that one.

We also found several small stick insects during a trip to Missouri. Unfortunately, we found them in the night and lost track of them before we could get the cameras out.

Walking Sticks belong to the Order Phasmida and account for around 3,000 species of insects. Vegetarians, they are harmless to humans. I have not found any suggestion that stick insects are vectors for human diseases; in fact, the stick insect is often regarded as an excellent pet for children.

Other Topics of Interest

Hi, I keep these insects as pets, they have always been green with red on their upper front arms, but the new hatchlings / nymphs are black and grow very fast, they move very fast too in comparison to the 'greens' I was wondering if you know anything on this and why they might be hatching out like this? I'd be very grateful for your reply.

we live in Bastrop Texas and these things are everywhere around our house. Yesterday we counted 6. They hang around the outside of the house and a small green one was on top of a huge brown one with the end of its tail wrapped around it. hmmmm. wonder what they were doing? Such interesting creatures!!!!!!

I call em walking sticks its so much better

If people wish to see walking stick insects, go to Honobia, Oklahoma. They are there by the thousands. My son and I were there on a hunting trip, every where we sat in the woods they were all around us on the trees and the grass. Untill this past weekend I never relized that male and female walking sticks looked any different. It was quite fascinanting.

Thank you so much for the video.I spotted a walking stick on my deck yesterday but had no camera available to take a picture of it.When I called my 90 year old mom to tell her,she said she never heard of one.Now when I visit her next week I can show her some pictures.We are educating the elderly through the internet.Thank you again.

Thanks for your help in teaching a five year old about walking sticks!

See a walking stick on the brick, outside our front door. Have pictures, if you would like. Have not seen a walking stick in a long time. This one is very large, I think. Do not see many this size. It is brown in color. We live in South Texas, about 16 miles West of Corpus Christi, Texas Send pictures, just tell me where to send them. Check out our hobby, the Rock Food Table. Will be in Billings,Montana, last two days of July and first two days of August.

My uncle found one in the woods in northern Wisconsin.It is about 3 to 4 inches long from tail to head not counting the feelers. Is this considered a large one? Thank you for posting what they eat cause I plan on keeping it for a pet.If you want to contact me about the insect please feel to do so.