I Endorse This Message 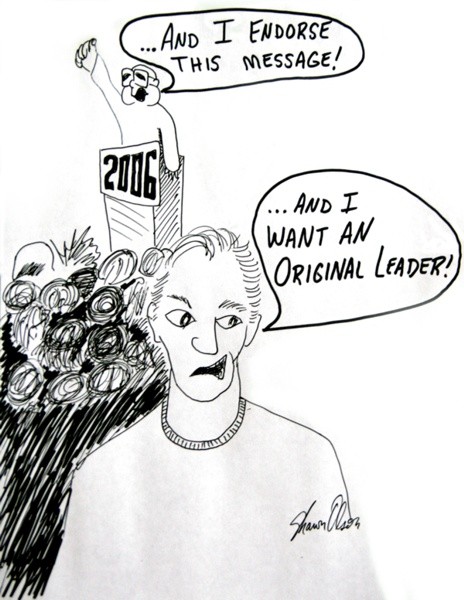 Every year political candidates search for new ways to sway the opinions of the voting public. It only makes sense. In early America the best way to get voters on your side was to host a free public beer party—yep, American icons like James Madison, et al, got elected by getting voters drunk.

Things haven’t changed for the better. The American public no longer gets the benefit of a buzz when getting sucked into electing public officials—though the public still has to endure hangovers that can last years.

Today’s tactic is to appear more friendly than in the past by having all the mudslinging coming from third parties. Now candidates are nicer than in the past—instead of saying that their opponents are worthless, candidates hire someone else to say the mean stuff. Nowadays it’s fine to back up third parties that hate your opponents and then give your stamp of approval. "I’m Joe Shmoe, and I endorse this message.” Or... "I’m Jane Shmane, and I approve this message.”

I’m no one to think mudslinging and muckraking are good for the public. But then again, I don’t think that it’s fine to be a wuss either. The real problem is that the only thing that politicians can think of to talk about is how horrible their opponents are rather than anything intelligent.

As long as the American public refuses to educate itself in logic, science and history… the low caliber of political character will simply remain. While democracy is the best theoretical scheme of social organization, it is less than perfect when the politicians are mostly unintelligent and the public is largely moved by pack instincts.

Observations on American politics from a former journalist.