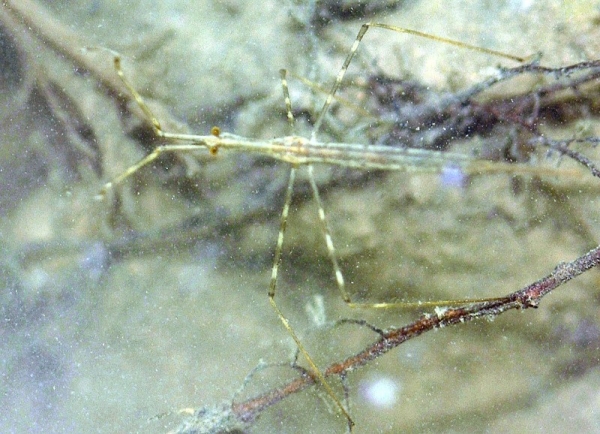 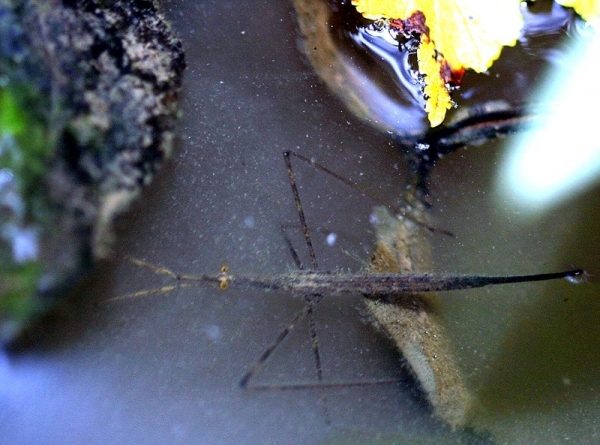 As one who loves to explore the natural world, I am always excited to learn of something new. I recently went on a hike with my friend Rich Boucher along Darby Creek in Western Franklin County, Ohio. There we came to a pool that was populated with a large colony of bullfrog tadpoles and crayfish.

Along the bank I noticed several large insects submerged in the water. My first assumption was that they were unfortunate walking sticks who somehow fell at once into the water. I dipped my hand into the water and set three of the large stick-like insects onto the shore; the insects immediately scurried away.

I was a little suspicious due to the odd gait of the insects. They did not look like Walking Sticks once in my hand or on land. So when I got home I researched them and found I had discovered some Water Scorpions, also known as the Water Stick Insects (the Ranatra linearis), underwater predators.

So I went back to the pond a few days later to find that the Water Scorpions were still very populous under the leaves along the bank. I also found that the crayfish were likewise thriving. However, the tadpole population had already diminished remarkably. How much this was due to tadpoles transforming into frogs and how many were eaten by the crayfish and Water Stick Bugs is unknown to me.

Anyway, I am happy to have discovered this oddity in the water. One almost looks like a water strider crossbred with a praying mantis. They breathe through tubes extending from their rear, so they behave like giant mosquito larvae sucking air when hanging from the surface of the water.

The largest Water Scorpion I saw was about six or seven inches in length.

Photos of insects that live in the water.

Thanks for posting the pictures. I live in Michigan and last year found this bug with my kids. It was very strange. I thought it was a Mantis that was drowning but it kept running back into the water when we'd take it out. It even swam backward. You site answers our question "What is it?".

Have a good day.

Photo of a water stick insect walking along a stick. 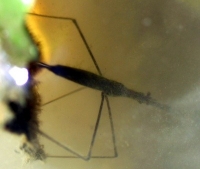 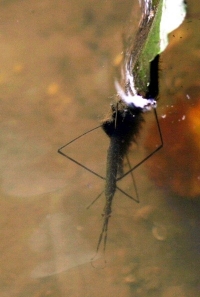