The Tale of a Stubborn Horse 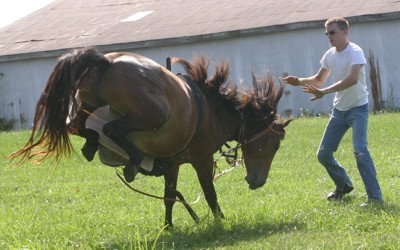 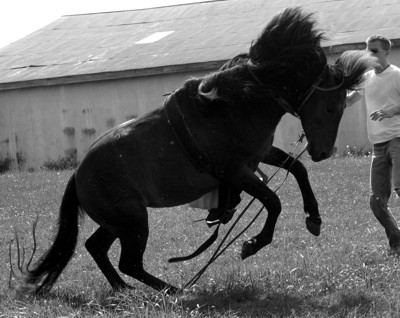 Our family had the opportunity to stay with our friends Dave and Debbie Hutzell recently. They own a bit of land near the Marengo, Ohio area. It’s a rural community of farmers and country-folk about forty minutes north of Columbus.

While there Alex Fogle, a firefighter and horse wrangler, stopped over to do some training with Debbie’s young horse Ricky. So I sat back with my camera (merely to test out my fix to a problem I was having). I expected to get a couple nice shots to share with Debbie and Alex… but I got more than I bargained for, but not quite as much as Alex got.

My camera held up fine as the training exercise turned into a rodeo. Word after the event is that Ricky is an ornery horse. That much is obvious from these photos. What isn’t so obvious is the pain Alex was feeling near his tail bone after the event; also missing from the photos was the smirk I swore I saw on Ricky’s face.

Note: I never really expected this page to get as many visitors as it does--and I never realized that it would spur any comments from visitors. One thing I need to clear up (since I have gotten some angry emails from time to time about this) is that the wrangler in these photos is not me--I was the one photographing the moment. I do not pretend to know anything about horsemanship. In fact, I have never ridden a horse. I have pet them, fed them and photographed them... but I have never had the opportunity to ride one yet.

Maybe you should consider asking the young man in the photos if he would allow it because it is his dignity that is at stake. I am sure if you made a mistake in your life you wouldn't want it posted everywhere. Give the guy a break. He was kind enough to let you photograph him while he was helping you with YOUR horse problem.

Yes, as long as you give credit and a link back to this website.

Are you stupid or what? It's obvious that the horse hates what your doing! And Smoking doesn't really help. How would you feel, if you were the horse, and someone smoked you right in your face huh??? Have you tried training the horse and make it trust you 100%?? And if the horse still hates you, then try to make someone else training it!

Beatrice ... thanks for sharing the opinion. Just a reminder, for anyone who missed the text above, the trainer in these photos was not me. I was present with a camera; I was (and still am) ignorant of anything regarding training horses.

and the tack was horrible nothing fitted the horse

and smoking after are you retared or something :~(

Stupid is stupid. Helmet wouldn't have made this any less stupid, or safe.

its ok .dont give up do your ground work first then get back on . your both learning.earn his trust

Hm. You're even worse than I was when trying to ride Crow, which resulted in a wrist that's damaged for the rest of my life.

Take it slow, lead him with the saddle on, make sure the saddle stays on and fits the horse. Have a long rope so that he can buck if he wants to without standing close to you. Take it slow, start with moving the saddle about, then put some weight in it, finally sit up. Get off again. Next time you sit, let someone lead the horse and the rider should do nothing at first. Don't go to next step before the first one works. Don't put weight in the saddle before the horse is calm with you moving the saddle. It's a living being and you're scaring the crap out of him. Would you like to be scared to panic? Or would you prefer that the man-eating lions teached you slowly so you couls adapt to it?

Excuse my tpyos and I make this important clarification...this horse should NOT have mounted by this rider :~(

Sense the horse is bad, he should have just came up firmly, calm and asertive. U cant Just walk up to a horse and expect it to do what ever he wants. He need to work with him more and if the horse does somthing good reward him and practice more.

This trip was set up for diaster from the tacking! The bridle is ill fitting with bit hanging so low in the mouth that it come out after the too loose saddle turned, dumping the rider. This rider proved to pain in the mouth as well as the back. A proper fitting saddle and bridle are a must. A breast collar and back girth would add stablity to basics. Lunging him first would take extra energy out him and build trust. Sack him out would no even more including desensitize for the slip of a saddle. NUMBER 1 rule with horses is SAFETY FIRST! This includes using properally fitting tack. This horse should have been mounted by this rider :~(

Do not 'Cowboy up'. Train that horse from the ground and then in the saddle. It has some behavior issues to be worked out. Never feel like you *have* to get back in the saddle. You are safer on the ground.

Cowboy Up and try it again!!!

If the horse bucks you off once, get on again and try again. If it happens again, lunge at a walk, trot and canter and then get on again. If the results are the same, look at reasons why your horse is bucking. The girth could be pinching him, something sharp caught be caught under his tack, he could be sore in the back....Don't just ignore the problem or try to solve by violence...You need to see why your horse is unhappy. And ALWAYS remember to wear a helmet!

good job on testing things out first before putting the little girl on. Cowboy up and get back on. You wont make this mistake again. Iam glad all my mistakes arent on camera!

you were heavy and he managed to get you off. better luck next time

If the girth was tighter that episode never would have happend and you would still be on. That horse will probably never stand to be saddled again. Have u ever riddin before??? :(

I hate to say it but Karen is wright. The worst thing that can happen is have the saddle flip under like that that horse is going to need some serise despooking before you try to get on again but don't give up.

I DO NOT think that this poor horse should have been mounted in the first place. The trainer should have worked to gain the horses trust and lung it. Then start working on putting the saddle on untill you and your horse are ready. DO NOT cowboy up! That is how tack, human, and animal get hurt. Also, the girth should have been tightened more because the saddle slipped. When the horse was kicking he could have gotten on of his back hooves caught on the saddle and been seriously hurt. Also, when Alex fell he shouldn't have put his arms out like he did. He could have broken his arm, wrist, or one or more of his fingers. Good pictures though. I just wish they weren't so dangerous.

Your a horrible rider. Nice touch with smoking next to your horse at the last picture, too. I'm sure that won't damage his lungs. 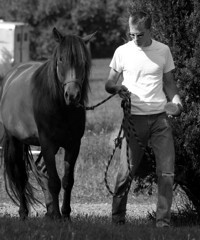 Alex walking Ricky before he gets the saddle on. 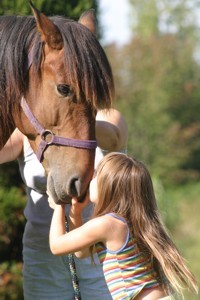 Alysa gives Ricky a big kiss... well, a kiss as big as a munchkin can give a beast.

Alex and Debbie putting the saddle on Ricky. I almost think the horse was winking at the camera.

Alex puts the bit on Ricky. I was reminded of times at the dentist. 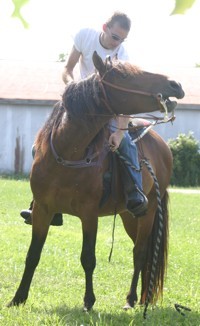 Alex is on Ricky. Ricky looks back to make sure that Alex is on... 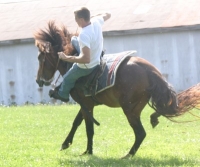 And off he goes. The leisurely walk lasted for about 1.1 seconds before the bucking began. 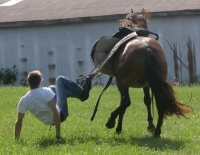 Alex almost lasted 8 seconds... but I don\'t think he quite made it.

I couldn\'t tell if Ricky was asking for round two or just mocking Alex. 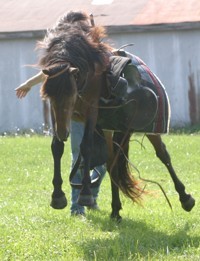 Ricky decided to show off his jumping abilities.

There was a smirk in Ricky\'s eyes; Alex wasn\'t too happy though.